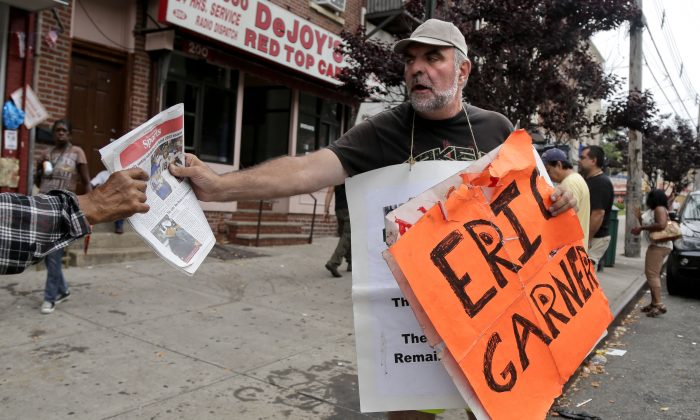 Doug Phaneuf hands a newspaper to a pedestrian while offering information to passers-by about a rally for Eric Garner, Friday, Aug. 1, 2014, in the Staten Island borough of New York. Garner died after he was put in a chokehold while being arrested last month for selling untaxed loose cigarettes. On Friday, the medical examiner ruled Garner's death to be a homicide caused by a police chokehold. (AP Photo/Julie Jacobson)
New York

The city agency tasked with receiving public allegations of police misconduct, the Civilian Complaint Review Board (CCRB), convened Tuesday to discuss the latest on their investigation of chokehold complaints and how to improve its handling of complaint cases.

Following the death of Staten Island resident Eric Garner after a police officer put him in a chokehold, the CCRB announced two weeks ago that it would conduct a thorough study of the chokehold complaints the board received, in order to understand how police officers were still allowed to use the maneuver despite it being banned since 1993.

Tuesday was the first board meeting after Eric Garner’s death. Richard Emery, who was also newly appointed as chairman, said the agency has received 1,128 chokehold allegations from 2009 to the first half of this year. Of those complaints, 608 were not fully investigated and only 10 were substantiated, or showed clear evidence that a chokehold had indeed been used. He hopes the study, which he estimates will completed by the end of August, would provide insight into why so few cases were substantiated.

Emery noted that one problem with their procedures was that allegations were only classified as chokeholds after investigators finish their investigation and drafted a report, so the actual number of chokehold complaints the board received could be inaccurate.

Emery also suggested a method to categorize the complaints into different levels of severity, so that cases can be resolved more quickly. Currently, the cases are dealt with on a first come, first served basis and have not been processed efficiently, Emery said.

Members of the public mostly responded to the board meeting with criticism. Paul Dans, an attorney and Upper West Side resident, called the board’s discussions “bureaucratic” and felt it had “no sense of urgency,” despite the death of Eric Garner.

Michael Meyers, executive director of the advocacy group, New York Civil Rights Coalition, called out the board for complacency and failing to put pressure on the police department to change its ways. He called on the board members to resign in protest if the police department fails to discipline its officers in the wake of Eric Garner’s death.

He also urged the CCRB to call out mayor Bill de Blasio for supporting “broken windows” policing, saying it unfairly targets minorities and the poor. “The chokehold is a result of broken windows. It’s criminalizing minor offenses,” he said.