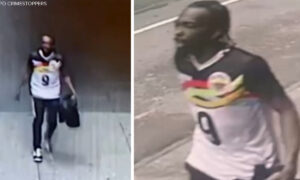 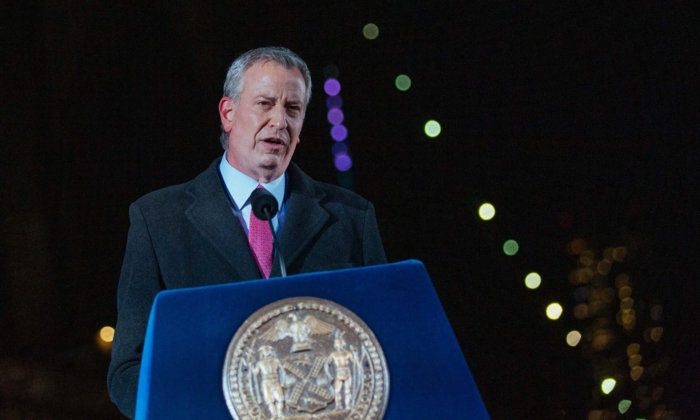 New York City officials say detectives are seeking the suspect in the shooting of an innocent bystander who was visiting Times Square with his family over the weekend.

NYC Mayor Bill De Blasio addressed the June 27 incident at a press briefing on June 28, saying the shooting at the tourist hotspot was “absolutely unacceptable.”

“This is a place that is so precious and so important to our city, it has to be safe,” the mayor said as he announced new safety protocols.

The mayor announced a new safety plan, called the Times Square Safety Action Plan, which includes an additional 50 police officers, both uniformed and undercover, in the Times Square area, while also increasing the enforcement of illegal vending related to gun violence. The plan put in place will be active immediately.

“After this shooting and the shooting that we had a couple of weeks ago, it is important that we put a lot more of a police presence over there,” New York Police Department Chief of Department Rodney Harrison said during the briefing.

Samuel Poulin, a 21-year-old man from upstate New York who was visiting Manhattan with his family, was struck in the back by a stray bullet and was rushed to Bellevue Hospital Center with non-life-threatening injuries.

Harrison noted at the briefing that the shooting occurred after a group of street vendors selling CDs got into an argument, adding that the information is preliminary and officials are still working to “get to the bottom of” what exactly happened.

He added they are “making sure we’re not just having the omnipresence out there, but we’re going to make sure we engage the individuals that are part of this aggressive solicitation, aggressive panhandling.”

The NYPD also released a surveillance photo of the suspect, who was seen in the video brandishing a weapon in the city’s Times Square area. The department added there is a reward of $3,500 offered for information leading to the arrest of the suspect.

????WANTED for ASSAULT: Do you know this guy? On 6/27/21 at approx 5:15 PM, in the vicinity of 45th St and 7th Ave in Manhattan, the suspect discharged a firearm, striking a 21-year-old male bystander in the back. Any info? DM @NYPDTips, or anonymously call them at 800-577-TIPS. pic.twitter.com/VdJtVcwapA

The incident occurred near the scene of a shooting last month that left two women and a child wounded. Police Commissioner Dermot Shea told a press conference at the time that the victims—a 4-year-old girl from Brooklyn, a 23-year-old woman from Rhode Island, and a 43-year-old woman from New Jersey—were “innocent bystanders” unrelated to one another.

NYPD Detectives Chief James Essig confirmed several days after the May 8 shooting that Farrakhan Muhammad was arrested by the U.S. Marshals Service in a McDonald’s parking lot near Jacksonville, Florida.

According to the New York Post, Muhammad has a criminal record stretching back to 2007, including two felony robbery arrests and a 2012 weapons arrest.