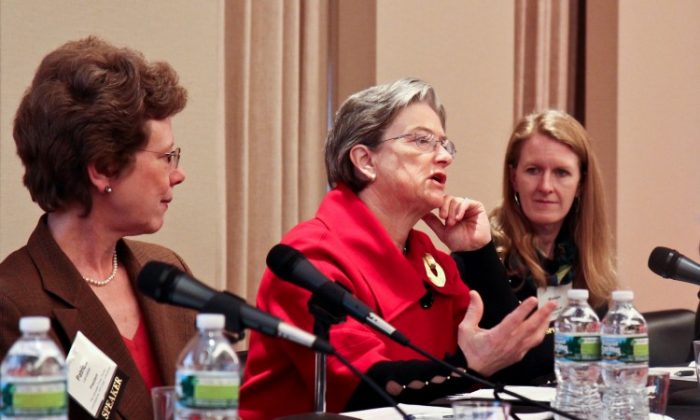 NEW YORK—In the historically male-dominated real estate industry, women have steadily risen to top positions in sectors such as finance, construction, and government.

One of the forum’s sessions, The Power Players: Infrastructure, Government, & Public Policy, brought together six female professionals in the city’s real estate world to discuss the intersection between the public and private world. The Epoch Times caught up with three after the session and asked:

What should people know about infrastructure, government, & public policy?

In order for the U.S. to stay competitive we have to deal with our infrastructure. It has to get sexier because it needs to get funded. If you look at the quality of life either in New York or in the country, we’re falling behind. Every place is looking at parks, schools, hospitals, transportation, energy, telecommunications systems, and we need to get them up to speed. CEOs are looking at quality-of-life as a determiner for where they’re going to take their business. To stay competitive we have to have a good quality of life.

Sustainability is a big part of what we do now. In the city, about 80 percent of the carbon emissions come from the built environment, so I think reducing that is a big initiative for the city, state, and federal governments. That’s going to set the tone for how to retrofit buildings over the next 30 years at least.

A partnership [between environmental groups and real estate], that’s worked well. The conversation started off rough because people automatically assume real estate is in an adversarial position to the environment, which is in an adversarial position to regulation, but we’ve actually started to get to know each other pretty well, and I’ve worked on both sides of the issue. I’ve worked for the city and real estate, and a lot of the building owners and landlords—they want to make these retrofits. If it’s better for the environment and lowers energy consumption, it’s probably better for the buildings. The tenants all want it and it’s an amenity that they can now offer.