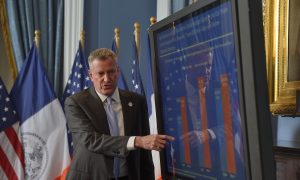 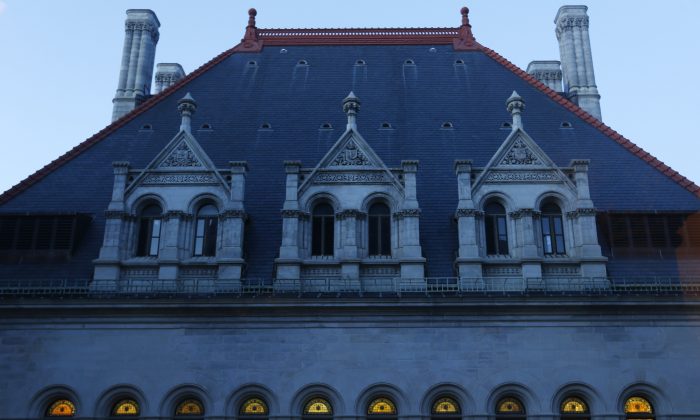 The windows of the Assembly Chamber at the Capitol are illuminated as lawmakers work into the evening on the state budget in Albany, N.Y., March 31, 2014. New York is poised to collect nearly $3.3 billion from a recent record settlement with France’s largest bank. (AP Photo/Mike Groll)
New York

ALBANY, N.Y.—New York is poised to collect nearly $3.3 billion from a recent record settlement with France’s largest bank, and the Cuomo administration plans to add it to the state’s general fund.

It’s more than enough to fund the state’s prison system or its child welfare programs for a year. But the administration said even with the windfall, the state will continue to limit annual spending growth to less than 2 percent.

BNP Paribas reached an $8.83 billion settlement with federal and state authorities for violating U.S. trade sanctions and conducting dollar transactions for clients in Sudan, Iran, and Cuba. The bank acknowledged that $190 billion in transactions went through its New York office and other branches while hiding client identities for more than a decade.

Another $298 million from the settlement will go into a special state fund for addiction treatment at the state Office of Alcoholism and Substance Abuse Services, officials said. That’s a 51 percent boost above the agency’s budget for the year.

“Our Department of Financial Services is an effective and forceful regulator, and we will continue to enforce our anti-money-laundering rules,” Gov. Andrew Cuomo said announcing New York’s role in the settlement last week.

It’s the largest single settlement by the Department of Financial Services, which regulates both banking and insurance. The department also is collecting $715 million from Credit Suisse for cross-border banking violations, part of a $2.6 billion settlement with state and federal authorities in May.

BNP Paribas has pleaded guilty to New York criminal charges of falsifying business records and conspiracy and faces a federal charge. Its punishments include a one-year suspension of dollar-clearing transactions through its state-licensed New York branch in 2015. The bank’s shares rose in international trading last week after it said it could pay the entire amount.

New York’s civil penalty, due July 30, is $2.24 billion, with another $1.05 billion expected in reparations paid to the Manhattan district attorney. That’s being distributed under terms set by state law, according to the district attorney’s office.

The DA’s office is set to receive nearly $449 million, about five times more than its annual budget, with New York City receiving another $447 million.

Manhattan prosecutors plan to use their share for law enforcement projects. Past settlements have been used for cybercrime and courtroom technology, witness counseling, and a unit focusing on human trafficking. Initiatives under consideration include public housing safety, upgrading city police technology in precincts, and a study of the illegal gun market.