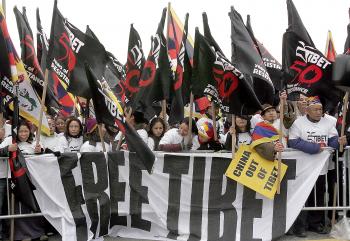 FREE TIBET: Tibetan protesters outside the Chinese Consulate on W.42nd St. on Tuesday. March 10, 2009 was the 50th anniversary of the Tibetan uprising against Chinese forces. (Tim McDevittThe Epoch Times)
US

NEW YORK—To commemorate the 50th anniversary of the 1959 uprising against the Chinese Communist Party's invasion, occupation, and rule over Tibet, local Tibetans and Tibet supporters held a large-scale march cover many miles on Tuesday.

The march began at Brooklyn Borough Hall, progressed over the Brooklyn Bridge to the United Nations, across town to the Chinese Consulate, and ended at Union Square on Tuesday evening.

An estimated 2,000 to 3,000 marchers participated in the day’s events that remained largely peaceful, though spirited.

For Tibetans, the day commemorates the 1959 uprising in Lhasa by Tibetans against Chinese Communist Party rule. The Tibetan government-in-exile cites several factors that led to that uprising, the first major uprising after China forcibly took over Tibet in 1950.

The CCP lopped off parts of Tibet's territory and assigned them to adjoining Chinese provinces. They also removed various Tibetan ethnic groups, such as Sherpas, from their Tibetan identification and classified them as distinct Chinese minorities. The CCP army had appropriated thousands of tons of barley and other foodstuffs.

The Tibetan government-in-exile Web site says, "Chinese army intelligence reports admit that the PLA killed 87,000 members of the Tibetan resistance in Lhasa and surrounding areas between March and October 1959 alone."

An estimated 80,000 Tibetans fled to neighboring India, Nepal, and Bhutan over the next few months. The Dalai Lama left Lhasa on the night of March 17, 1959, eventually settling in India.

Tsering Palden, of the Tibetan Youth Congress of New York and New Jersey Chapter, was an organizer of Tuesday’s activities. Palden, originally from Lhodak, Tibet, immigrated to the U.S. in 1999 to study computer science and has been involved in Tibetan independence activities in the New York area ever since.


“We are here to commemorate the 50th anniversary of the Tibetan national uprising day. The uprising in Tibet was crushed down by Chinese authorities, which resulted in the Dali Lama going into exile, and ever since that day the movement is carried on by Tibetans all over the world, and even inside Tibet.

That day in Tibet, a lot of Tibetans died, the Chinese just opened fire; it opened the darkest period in Tibetan history,” said Palden.

The marchers chanted "Long Live the Dalai Lama" and "China's Communist Party lies, Tibetans Die" and "Hu Jintao is a Killer.” As the protesters marched uptown, traffic was slowed along their path, and upon reaching the U.N. they demanded an end to China's illegal occupation of Tibet. Tibetans expressed their desire for democracy, freedom, and human rights in Tibet.

As part of the day’s activities, panel discussions were held in Flushing, Queens, discussing China's regime and Tibet. The protesters also held a rally in Union Square along with China's Democracy Party, where videos of last year’s Summer Olympic protests were screened.