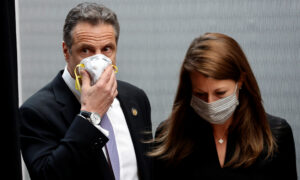 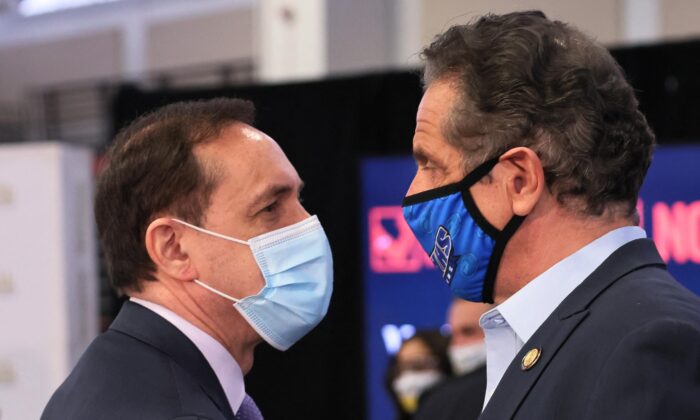 The government of the State of New York still has more explaining to do and heads that should roll regarding the decision to order that nursing homes accept patients with COVID-19 last year, according one of the state’s leading think tanks.

The state government still hasn’t released data crucial to gauging the real magnitude of the scandal. It’s obvious, though, that the governor’s office and other officials are engaged in a coverup, according to the Empire Center for Public Policy’s health policy expert Bill Hammond. All of those responsible should resign, including the state’s health commissioner Howard Zucker, Hammond said.

The scandal revolves around an order issued by Zucker on March 25, 2020, which stipulated that “no resident shall be denied re-admission or admission to the NH [nursing home] solely based on a confirmed or suspected diagnosis of COVID-19.”

The order went as far as prohibiting staff from testing “medically stable” hospitalized clients for COVID-19 before admission.

Under the policy, more than 9,000 COVID-19 positive patients were transferred to long-term care facilities, contributing to the nearly 16,000 deaths attributed to COVID in such facilities, according to a statistical analysis by the think tank. Exactly how much the policy contributed to the deaths is “very difficult to perfectly quantify,” according to Hammond, who is a senior research fellow at the Empire Center.

The difficulty is compounded by the state’s delaying the publication of a large amount of data that it has collected on the issue. A coverup and dishonesty regarding the issue has been the most blatant part of the scandal, he claimed.

Gov. Andrew Cuomo recently announced his resignation, on its face value due to a separate issue of inappropriate behavior toward women. But others involved in the coverup are still holding onto their chairs, Hammond pointed out.

He called on the incoming Gov. Kathy Hochul to “fire the falsifiers,” in a recent op-ed in the New York Daily News.

In some regards, Hammond said, he is willing to give the Cuomo administration “the benefit of the doubt,” he told The Epoch Times.

In mid-March, 2020, COVID-19 was quickly spreading in the city and hospitalizations multiplied from about 300 to more than 3,000 in less than two weeks. Expert projections were showing hospitalizations would reach as high as 110,000 in the state, about twice its hospital capacity.

“It was reasonable for him to be really concerned about that,” Hammond said.

Under these circumstances, there was a danger that elderly patients who were already recovering from COVID-19, but could still be infections, would be occupying hospital beds for weeks as long-term care facilities would refuse to accept them. If nursing homes were required to accept them, despite the obvious risks involved, it would have freed up some hospital capacity.

Hammond was willing to cut the Cuomo administration some slack for trying to pick what it could have seen as the lesser of two evils.

There are many things, however, for which the government should be faulted, he said.

Cuomo said the policy was based on guidance from the Centers for Disease Control and Prevention (CDC). The guidance said that nursing homes can accept recovering COVID-19 patients, but only if they can adhere to the CDC’s “Transmission-Based Precautions” that outlined considerations for the safety of other residents.

The guidance recommended the homes set up an isolated area where the potentially infectious residents could quarantine for 14 days. The state directive, on the other hand, didn’t include these precautions. It bluntly said nursing homes “must comply with the expedited receipt of residents returning from hospitals.”

Cuomo later argued that nursing homes always had the option, under state law, to refuse any patient they couldn’t properly care for. But, as Hammond pointed out, the state directive came in a state of emergency when the government is authorized to suspend certain laws and regulations.

“Since the March 25 directive invoked the emergency and used prescriptive language, nursing home officials might reasonably have assumed that it was meant to supersede normal regulations,” Hammond said in his Aug. 17 report on the issue.

The state directive is technically still in effect, but in practice, it was discontinued after six weeks when another directive that banned hospitals from sending COVID-19 patients to nursing homes was issued.

Six weeks, however, was too long given the facts on the ground at the time, according to Hammond.

After just one week, hospitalization data had already indicated that the hospitalization projections were grossly off-mark. One of the most prominent state-by-state projection models came from the University of Washington’s Institute for Health Metrics and Evaluation.

On April 1, 2020, the model was updated with additional data, but it was clear that it had little to no correspondence with the facts on the ground. The projections warned that New York would need 41,000 to 58,000 hospital beds for COVID-19 patients by April 1, 2020. But even by April 3, 2020, the state had less than 16,000 hospitalized. The hospitalizations peaked before mid-April, below 19,000, and then dropped about as quickly as they rose.

One Size Didn’t Fit All

While some hospitals in the New York City area got overloaded during the pandemic peak, that was not the case further upstate. The impact of COVID-19 was much milder in those small-town and rural areas, but the local nursing homes were still required to accept COVID-19 patients. It is in these areas where Empire Center’s statistical analysis showed the most severe impact of the state directive.

The admission of every 10 COVID-19-positive patients resulted in about six additional COVID-19 related deaths, the data indicated.

“In the upstate region, facilities that admitted at least one positive patient during this period accounted for 82 percent of coronavirus deaths among nursing home residents, even though they had only 32 percent of the residents,” the analysis stated.

The analysis could benefit from additional data to make its conclusions broader and more robust. But the state hasn’t been forthcoming with this data. This alludes to a major problem that Hammond pointed out—one that’s as damning as it is indisputable, he said.

As it became clear how COVID-19 was having a devastating impact on nursing home clients, the state directive started to draw increasing scrutiny. In response, the governor and many in his administration engaged in blatant dishonestly, Hammond documented in this report.

“They’ve done nothing but spin from the very beginning,” he said.

The officials tried to explain the directive away by implying that it mainly pertained to COVID-19 patients who were sent to a hospital and then simply returned back, Hammond’s report said. In fact, more than two thirds of the nursing home COVID-19 patient admissions were not prior residents, he found from data released thanks to a court order stemming from the Empire Center’s freedom of information lawsuit.

Another move came in early May when the state started to omit from nursing home reports any COVID-19 deaths that didn’t occur in the home itself, such as those that took place after the patient was transferred to a hospital. The state acknowledged this change in its reporting in a footnote, but the fact remained that a portion of the deaths was thus hidden.

“The result was to make New York’s nursing home death toll look roughly one-third lower than it actually was,” the report stated.

In an unusual move, the state also removed the March 25 directive from its website sometime in early May. Media noticed the edit several weeks later.

Probably the most outrageous part of the cover up came in July, 2020, when the state health department released a report saying the March 25 directive was “not a factor in nursing home fatalities.” Instead, it blamed staff members for unwittingly bringing the virus in early in the pandemic.

“Although presented in the form of a scientific analysis, the [state health department] report was replete with falsehoods, omissions, errors and questionable analyses that discredited its central findings. Some of its flaws were evident right away; others came to light later,” Hammond’s report said.

For starters, the government’s report omitted the resident deaths that occurred outside of the homes.

Most importantly, its conclusion was a non-sequitur, according to Hammond.

The report correctly pointed out that nursing home deaths peaked in early April, too early for the March 25 directive to act as the driving factor. But that hardly rules out that transfers from hospitals played a role, Hammond argued.

“Residents kept dying by the hundreds per day for weeks after the peak, and certainly some of those victims could have caught the virus from an infected patient arriving from a hospital,” he said.

It was later reported that, although prepared by the health department, the state report had been heavily edited by Cuomo’s aides.

When various groups started to demand data on the nursing home deaths, the government stonewalled them, Hammond said.

“The governor and other officials consistently deflected requests for that data from reporters, watchdog groups, industry associations, and even members of the Legislature,” the report said.

Zucker repeatedly claimed he couldn’t provide the numbers because he needed to make sure they were “absolutely accurate.”

Reportedly, a Cuomo aide completed an audit of nursing home deaths in late August, but the administration withheld the data until February, after the Empire Center won a court order forcing its release.

“No large-scale data-gathering system is error-free. An accuracy-based exception to FOIL would be license to block virtually any request for records,” he said in the report.

The state’s “delaying tactics” clearly violated the law, he said.

That order, however, only pertained to data regarding deaths. To assess more accurately how much of an impact the March 25 directive had, it would also be necessary to analyze data on infections in nursing homes—both those determined by a test as well as those suspected based on COVID-19-like symptoms.

The Empire Center filed dozens of requests for this and other data sets, but the state responded by claiming it’s still searching for the data. This is the same delay tactic used for the death data, Hammond said.

Hammond didn’t try to determine criminal culpability by state officials. For that, he looks to the investigation led by the U.S. Attorney’s office in Brooklyn. He has called for an investigation into the state’s preparedness for health emergencies and the pandemic response in general.

“The state was caught with its pants down when the pandemic arrived. That’s partly on the governor, the fact that he was not better prepared for what happened,” he said.

Notably, the state should have had contingencies in place for the eventuality that hospitals would get overrun due to an infectious disease outbreak, he said.