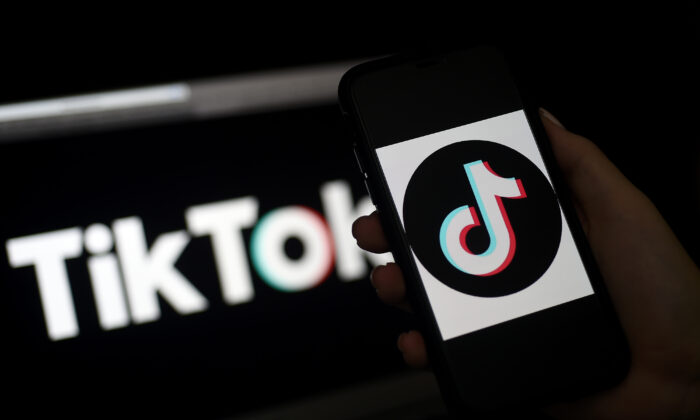 The logo of social media application TikTok is displayed on the screen of an iPhone in Arlington, Va., on April 13, 2020. (OLIVIER DOULIERY/AFP via Getty Images)
China-US News

“On the surface TikTok appears to be a harmless tool for creating short videos with music when in reality it is a data mining instrument that violates our privacy and could threaten our security,”  Jacobs said in a June 22 press release from his office.

“It is just too easy for the information it collects to be accessed by the oppressive Chinese government waging a fierce economic war against our state and our country.”

The bill, named “No TikTok on Government Devices Act” (S8600), was introduced by Jacobs on June 18.

It would add new language to section 103 of the New York state’s technology law, banning employees and public officers of the state from using TikTok or any successor application developed by its parent company ByteDance or any entities owned by ByteDance.

TikTok, known as “Douyin” in China, was launched by ByteDance in 2016. It is extremely popular inside and outside of China, with an estimated 800 million active users worldwide.

State employees would be exempt from the ban if they need to use the app for investigations, cybersecurity research activity, law enforcement action, and intelligence gathering.

Jacobs pointed to TikTok’s history of untrustworthiness, including its practice of censoring in the United States, refusal to testify in congressional hearings, and several of its corporate board members also being members of the Chinese Communist Party (CCP).

Recently, TikTok refused to testify at two congressional hearings, one in November 2019, and the other in March.

Following TikTok’s refusal to testify in March, Sen. Josh Hawley (R-Mo.), who presided over the hearing, issued a statement noting that if TikTok had nothing to hide, it would “need to quit stalling and testify before Congress.”

News website The Intercept reported in March that TikTok moderators were told to suppress video uploads from users with certain qualities, such as “ugly facial looks,” “obvious beer belly,” and “too many wrinkles,” based on leaked documents.

In September 2019, The Guardian reported that TikTok instructed its moderators to censor certain videos that mention topics considered taboo by the Chinese regime, such as the Tiananmen Square Massacre and Falun Gong, a spiritual practice that has been severely persecuted in China since 1999. The report was based on leaked documents detailing the app’s moderation guidelines. TikTok said in a statement that such policies were replaced in May 2019 and are no longer in use.

Jacobs noted that user information collected by TikTok—which, according to its privacy policy, includes the user’s IP address, location, and browsing and search history—could fall into Beijing’s hands, since companies are obligated to work with Chinese authorities in intelligence collection efforts.

“This legislation is a very reasonable response to the unnecessary collection of so much data and the history of distrust that has been created by this company and its ties to the Chinese Communist Party,” Jacobs said in the press release.

Jacobs is a Republican representing western New York in the 60th Senate District, which includes parts of the city of Buffalo, the city of Tonawanda, and the towns of Brant, Evans, Grand Island, Hamburg, and Orchard Park.