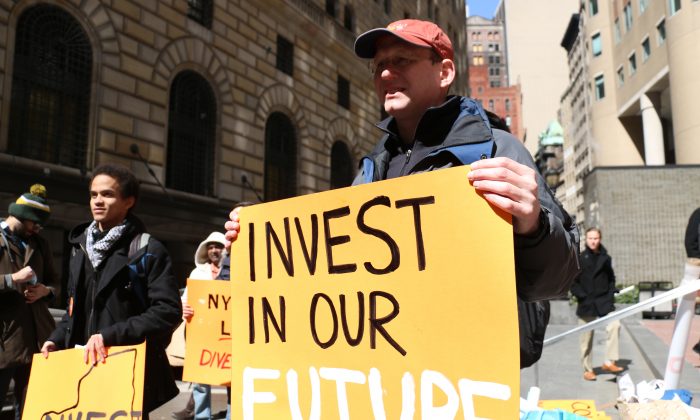 “Hey hey! Ho ho! Fossil fuels have got to go!” they chanted, holding signs like “Invest in Our Future”, “New York Can Be a Leader” and “Students Want NY to Divest.”

They carried petitions with 11,000 signatures requesting the State Common Retirement Fund (SCRF) divest itself of companies that produce oil, coal, and natural gas.

“We want the State of New York, particularly Tom DiNapoli, the state comptroller, to show some real leadership in becoming the first state to pull pension funds out of investing in fossil fuels,” said Mark Dunlea, a spokesperson for 350NYC.

DiNapoli’s department controls the state’s retirement fund, which has a budget of $160.7 billion and covers more than 1 million state employees. In the past year alone, 350.org NYC estimates that $5 billion in state funds was invested in oil, coal, and natural gas.

The concept of divesting for change became popular in the 1970’s when people started selling their stock in South African companies to protest apartheid. While the economic impact was minimal, it was very successful in raising awareness of the issue.

Beyond sending a clear message that fossil fuels are ruining the planet, divestment advocates say there are economic benefits as well. “You know the value of fossil fuels will go down because there will be more and more restrictions on their use as, finally, hopefully, government wakes up and realizes that we can’t continue to ‘burn baby burn,’” said Dunlea.

Coupled with the minimal risk of investing in more sustainable energy sources, advocates say that is a big incentive for the state to re-examine its stock portfolio.

It seems DiNapoli would agree. In a 2008 press release, he stated, “Clean technology and renewable energy have become increasingly profitable. It’s not just about doing good for the environment; going green is good for the bottom line too.”

That same year he launched the Green Strategic Investment Program that promised to “increase commitments to environmentally focused investment strategies” by $500 million over three years.

This is just one of the many green initiatives Di Napoli has started over the years. When considering fossil fuel divestment, however, Di Napoli seems to disagree on strategy.

Dunlea has discussed this issue with Di Napoli a few times. “He argues that the state has a more effective role in trying to use the voting power of the state pension plan on divestment resolutions,” said Dunlea.