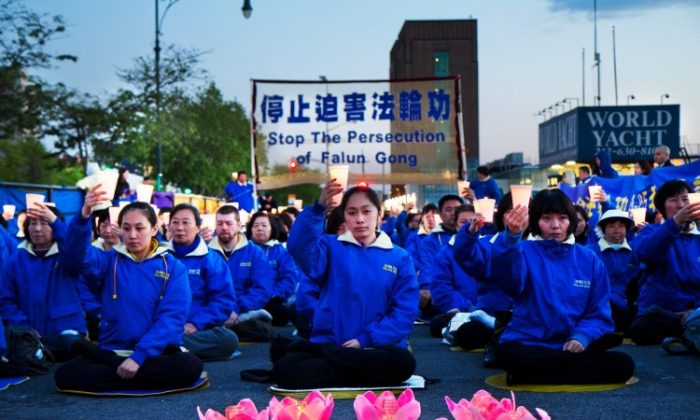 ALBANY, N.Y.—A group of  assemblymen gathered in Albany Wednesday to support practitioners of Falun Gong on the date when this traditional Chinese spiritual practice first seized the world’s attention.

On April 25, 1999, more than 10,000 practitioners gathered peacefully outside the Central Appeals Office in Beijing to protest the arrest of 45 practitioners in the nearby city of Tianjin. The incident was widely reported throughout the world, as it was the first large-scale peaceful protest in China since the 1989 student movement, which ended with the Tiananmen Square massacre.

“We’re subsidizing the inhumane treatment of your fellow countrymen,” said Assemblyman Mark Johns of Monroe County at a bipartisan press conference. Johns points to the $300 billion that goes to China annually from the United States in unbalanced trade.

Falun Gong (also known as Falun Dafa) has been persecuted in China since July 20, 1999. The Falun Dafa Information Center (FDIC), the official press office for the group, has recorded over 63,000 accounts of torture and over 3,000 deaths during a systematic and brutal campaign. Court cases filed in at least 13 nations against the leaders of the campaign in China, which includes recently ousted top official Bo Xilai, have characterized the persecution as involving crimes against humanity and genocide.

“We would like to send a message to the president of the United States, that we as a country should call on China to put a stop to this persecution,” said Assemblyman Eric Stevenson of Bronx County. “It’s about doing righteous things in life, and being upright, and helping the world to become a better society.”

In 1992, the practice was introduced in China, and by 1999, between 70 million and 100 million Chinese citizens were practicing Falun Gong, according to a study conducted by the state. People from all walks of life reported health benefits and inner peace from following Falun Dafa’s teachings of truthfulness, compassion, and tolerance.

“I remember in Changchun, my mom would be excited to go outside to practice [the exercises],” recalled Dr. Wenyi Wang, a practitioner from New York City. “There were time slots for practicing in the public square, with about 5,000 people at one time.”

Video footage of practitioners in China prior to 1999 shows thousands regularly gathering in public places to meditate, even filling large stadiums on special occasions.

At first the Chinese regime supported the Falun Gong practice, but by 1996 it began turning against it. The state banned sales of the main Falun Gong text, “Zhuan Falun,” which had been a runaway bestseller. State-run media began attacking Falun Gong, and state security began harassing and spying on practitioners, according to FDIC.

“The more popular Falun Gong became, the more resistance it encountered. Party leaders fear any large, independent group, and Falun Gong was probably the largest,” according to the FDIC website.

When practitioners gathered in Beijing on April 25, in addition to freedom for those detained in Tianjin, they sought to have the sale of Falun Gong books made legal again and the overall freedom to practice in public returned, according to practitioners at the press conference.

]The premier at the time, Zhu Rongji, agreed with the practitioners’ requests. Yet Jiang Zemin, then-head of the communist regime, disagreed and used the occasion of the protest to demand the suppression of Falun Gong in a letter sent the night of April 25 to top Party leaders. Three months later he launched a nationwide campaign to “eradicate” the practice.

“The Falun Dafa movement is a movement of good people,” explained Assemblyman Mike Fitzpatrick of Suffolk County on Wednesday. “People who simply want to be left alone to practice their faith.”

“We have to, in each of the 50 states, in each of the legislatures, send a message to the current administration—please raise your voice in defense of the people in China who practice Falun Dafa,” declared Assemblyman Johns.

Johns, Fitzpatrick, Stevenson, and Assemblyman Joel Miller of Duchess County, were joined by more than 50 Falun Gong practitioners from Albany, New York City, and surrounding areas in a packed room in the legislative office building.

“We want people to know that Falun Gong is a very good, peaceful meditation exercise and it shouldn’t get persecuted,” said Helena Cheng, co-organizer of the Albany event. Cheng has two children and five grandchildren, and began practicing in Long Island in 2000 after moving from Taiwan.

“Not only the people in the United States should care, everyone around the world should be concerned about this, because it’s a basic human rights issue,” said Cheng, adding that practitioners currently jailed in China should be released immediately.

Zhenjie Yu escaped from China after being held in forced labor camps for more than seven years. She described being force-fed with food laced with drugs, and being deprived of sleep for days. “The stretching, where my limbs were pulled in 4 directions, was most excruciating,” she said through a translator.

Zenon Dolnyckyj, a personal trainer in New York, explained how in 2001, he and 36 practitioners from more than 10 countries “descended upon Beijing into Tiananmen Square.” They unfurled a yellow banner that had the Chinese characters and English words for the three guiding principles of Falun Gong—truthfulness, compassion, tolerance.

“One of the lies spread was [that] other countries also banned Falun Gong, or also persecuted Falun Gong. We had an idea of showing Chinese people that their country was lying to them,” added Dolnyckyj. “Now we’re standing here in a government building, with government officials, not only saying Falun Dafa is good, but [that] the Chinese Communist Party is wrong.”