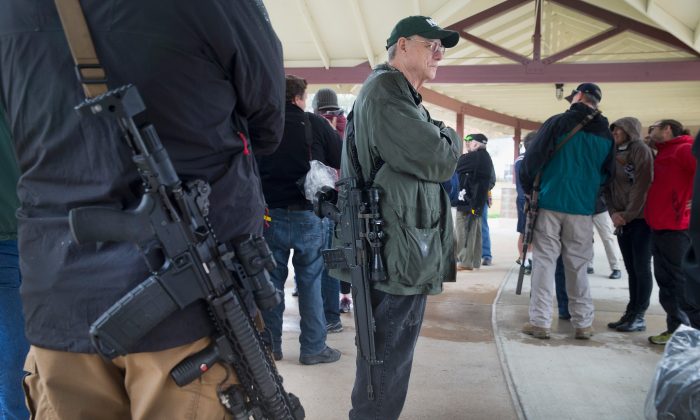 A New York sheriff has alerted licensed gun owners in his county to carry firearms and be on alert following the mass shooting in California this week.

“In light of recent events that have occurred in the United States and around the world I want to encourage citizens of Ulster County who are licensed to carry a firearm to PLEASE DO SO,” wrote Paul Van Blarcum, the Ulster County Sheriff, on Facebook.

“I urge you to responsibly take advantage of your legal right to carry a firearm. To ensure the safety of yourself and others, make sure you are comfortable and proficient with your weapon, and knowledgeable of the laws in New York State with regards to carrying a weapon and when it is legal to use it.”

He also urged all police officers to carry their weapons whenever they leave their homes.

“We are the thin blue line that is entrusted in keeping this country safe, and we must be prepared to act at any given moment,” he said.

The comments came after a couple killed 14 people and wounded 21 others in San Bernardino, California on December 2. California has the toughest gun laws in the nation, and no one on the scene appears to have had a gun on hand to try to stop them.

Ulster County is about 100 miles north of New York City, along the Hudson River.

Blarcum’s comments came after Joe Arpaio, the sheriff of Maricopa County in Arizona, called on the some-250,000 gun owners in his state to help fight terrorism and stop mass shootings.

Draw your weapons. That’s what one sheriff is urging nearly a quarter-million Arizona gun owners to do to fight terrorism and mass shooters. Do you agree with this idea?http://shout.lt/bk8m0

He told KSLA that gun owners need to take matters into their own hands sometimes.

“I’m just talking about the areas where you have large crowds and someone pulls out the gun and starts shooting. Maybe somebody with a concealed weapon takes the guy down,” Arpaio said.

Not everyone agreed with this stance, though. Steve Henry, chief deputy of the Pinal County Sheriff’s Office, said untrained gun owners can add to the chaotic nature of big events.

“Sometimes it’s not proper to pull the trigger because the collateral damage is not worth it,” Henry said. “We don’t want to walk into a gun fight between anybody, much less a gun fight where people are untrained.”