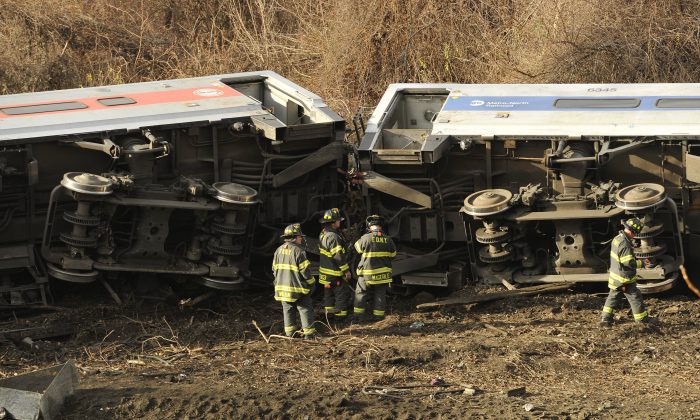 Rescue workers on the scene of the wreckage of the commuter train that derailed near the Spuyten Duyvil railroad station in the Bronx, New York, on Dec 1, 2013. (Timothy Clary/Getty Images)
New York

After a Metrolink train crash in 2008 in Southern California left 25 people dead, the National Transportation Safety Board (NTSB) asked the FRA to install outward and inward facing cameras on all of its trains. Since then the FRA has yet to enforce installation of cameras.

“This should have happened five years ago,” Schumer said during a press gathering at Grand Central Terminal.

Inward cameras would act as “a deterrent for dangerous behavior.” The driver of the California train was texting while operating the train. The outward cameras would monitor crossing accidents and any track deficiencies.

A drowsy train engineer apparently caused the recent Metro-North train derailment at the Spuyten Duyvil station in the Bronx. The train derailed on a sharp curve killing four people and injuring dozens of others.

Officials are still waiting for the NTSB report for a definitive explanation of the cause of the Metro-North train derailment.

“There’s a very clear consensus that these cameras will prevent many accidents,” Schumer said. “They might have prevented what happened at Spuyten Duyvil.”

Although there’s still no guarantee that the presence of audio and video recordings will eliminate all possible future accidents, Schumer said it’s certain that the cameras will make train travel much safer.

“We talked to the FRA about it and basically they’ve said that they should have implemented them,” Schumer said.

On Dec. 6, FRA issued an Emergency Order requiring Metro-North Commuter Railroad to modify the existing signal system to “ensure speed limits are obeyed and to provide two qualified railroad employees to operate trains where major speed restrictions are in place until the signal system is updated.”

Blumenthal said, “The cost of these audio and video recorders is minuscule, in fact negligible compared to the hundreds of millions of dollars that this tragic incident will cost Metro-North in the end.”

There are at least two survivors from the Metro-North crash who are suing the company, according to CBS reports.