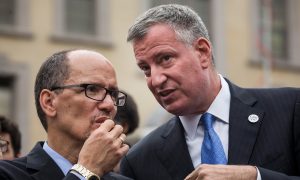 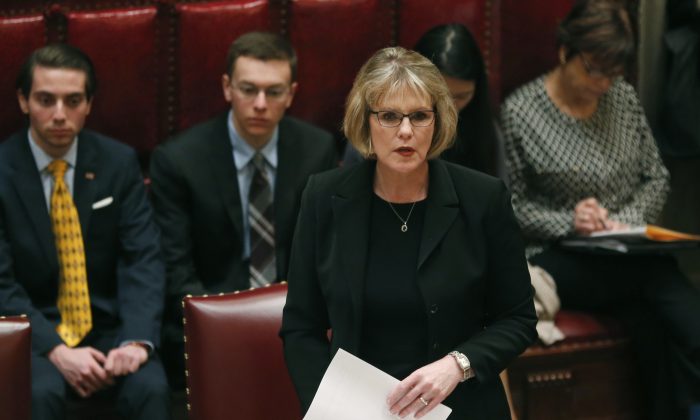 Sen. Catharine Young, R-Olean in the Senate Chamber at the state Capitol in Albany, N.Y., on Monday, Jan. 12, 2015. The Republican-controlled Senate has approved eight bills intended to ensure women's rights in the workplace and housing. (AP Photo/Mike Groll)
New York

The Senate’s 62-0 vote on each of the eight bills highlighted a divide that kept all nine measures effectively stalled last year when the upper chamber passed each one separately but the Assembly kept all nine in one package.

The Assembly leader, emphasizing on Monday the need to establish in state law the abortion rights New York women currently have under court rulings, signaled a possible repeat this year of the stalemate.

Public education is as American as our love for freedom.
— Rev. William Barber II

“Until the Senate decides that a woman’s right to choose is part of a woman’s agenda, I’m not sure that we’re going to have matching bills,” Assembly Speaker Sheldon Silver said.

Public school teachers, parents, and others rallied in favor of increasing funding for public education and against allowing more charter schools.

Charter supporters pushed to lift the cap on the number of charter schools allowed in New York City and statewide and for greater funding for existing charters.

In the Senate, Sen. John DeFrancisco, a Syracuse Republican, said that if abortion rights hadn’t held other women’s issues hostage two years ago, New York would now have equal pay for women and tougher criminal penalties for sex trafficking. He blamed “the so-called women’s groups” making this “all or nothing” about abortion.

Besides the measures on equal pay and on sex trafficking, the bills approved Monday would outlaw employment discrimination based on family status and allow sex harassment complaints at workplaces with fewer than four employees.

At the rally for public schools, the Rev. William Barber II described public education as “a deeply moral issue.”

“Public education is as American as our love for freedom,” said Barber, the event’s keynote speaker.

Among the charter school supporters, chief executive Kyle Rosenkrans of the Northeast Charter Schools Network predicted education would be “a constant conversation” during the session.