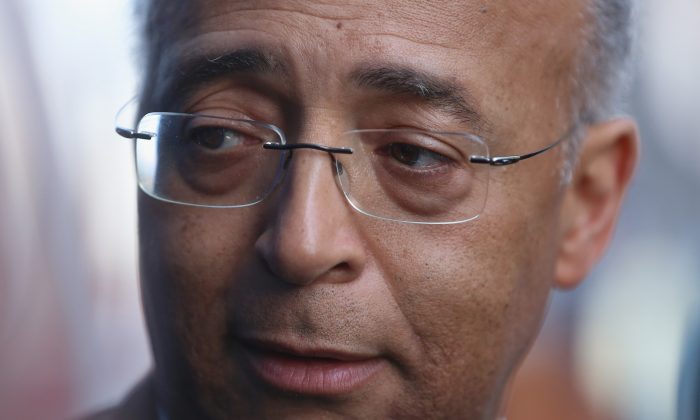 NY Police Should Give Written Reasons for Stops, Says Thompson

NEW YORK— On Tuesday, Democratic mayoral hopeful Bill Thompson became the first to outline how his administration would deal with the controversial police practice of stop and frisk. The practice has received heavy criticism from all of the Democratic mayoral candidates.

The announcement comes just two days before the City Council is set to vote on two historic bills aimed at reforming stop and frisk. These include adding an inspector general to oversee the NYPD, and allowing citizens to sue if they feel they are victims of racial profiling. Thompson has said he does not support either reform.

“Protecting our civil rights and preventing crime must not be competing ideas,” Thompson said Tuesday at a press conference outside police headquarters. “As mayor, I will keep New Yorkers safe and protect our constitutional rights.”

Thompson said he would hire a new police commissioner who would not abuse stop and frisk, however, he said he had not compiled a short list, as it was too early for that.

Thompson said his commissioner would understand, “Stop and frisk should only be used when an officer has legitimate suspicion that crime is likely to be committed, or when an officer believes a suspect is armed and dangerous,” according to a statement.

When asked to elaborate about legitimate suspicion, Thompson said, “Supposedly they have been there.”

Under the current policies, a record 685,724 stops occurred in 2011, mostly of young black and Latino men. Nearly 90 percent of the stops resulted in no arrests or summons being issued.

A federal judge ruled earlier this month stop and frisk unconstitutional, and ordered a federal monitor to oversee the practice. The city has appealed the ruling.

“We need to make sure the training is there, the criteria are there, and that individuals are treated with respect when they are stopped—and then in fact provided with the reasons why they are stopped,” Thompson said.

Thompson will require police officers to provide every person stopped a ticket which will include written information on why he or she was stopped, and what led to the stop.

“We want that report to be generated, and that ticket be handed to the person, and let them understand why they were stopped,” Thompson said.

Currently, officers fill out a Form 250 when they conduct stops. The form includes the same questions Thompson suggests, but the information is not given to the person stopped. Thompson did not specify if he would use the Form 250, or if he would create a new form.

When asked if the process would take too much time, Thompson said it would take a few minutes, not 15 minutes.

END THE ABUSE OF STOP AND FRISK
• Appointment of a new police commissioner who understands that stop and frisk is being abused, and has a clear vision of how to use it as it was intended.
• State clear criteria that stop and frisk should only be used when an officer has legitimate suspicion that a crime is likely to be committed, or when an officer believes a suspect is armed and dangerous.
• Eliminate racial profiling by getting rid of the de facto quota system within the department. This will ensure that the performance of commanders and officers is based on actionable criteria and safety, not the number of stops as currently utilized under the Bloomberg administration.

USE STOP AND FRISK WITHOUT ABUSING PEOPLES’ RIGHTS
• To end abuse and stop racial profiling that has occurred under stop and frisk, Thompson will modify the training for officers to follow established protocols and procedures in order to ensure the safety of both the public and officers. The implementation of stop and frisk will no longer be based simply on the fact that racial minorities show up more often in crime statistics.
• Experienced officers and existing district attorney staff will work together to train the department in new stop and frisk procedures.
• Give the most experienced officers who know how to use stop and frisk constitutionally the opportunity to take on tougher beats in the highest crime areas to reduce crime and ensure better community safety, as well as creative community policing strategies.
2,000 new officers will work side by side with seasoned veterans of the NYPD to acquire greater skills in expert policing, cross cultural communication and work with the community to gather evidence and stamp out crime.

MAKE SURE THE ABUSES OF STOP AND FRISK DON’T COME BACK
• To ensure accountability, Thompson will increase oversight of stop and frisk to mitigate abuse and ensure public safety. Oversight will allow for increased transparency, end racial profiling and provide a safer city.
• Require police officers to provide every person stopped to receive a ticket. Officers will provide people with written information on why he or she was stopped, why it is happening, what lead to the stop and why the police officer chose to stop the individual. Impose disciplinary actions on those that engage in racial profiling and other forms of discrimination.
• Additional data from stop and frisks will be updated regularly in Compstat tracking to better provide transparency to the public and inform crime prevention methods in neighborhoods.
• Monitor stop and frisk based on critical data, such as a crime committed, a weapon recovered, and a criminal apprehended and arrested.