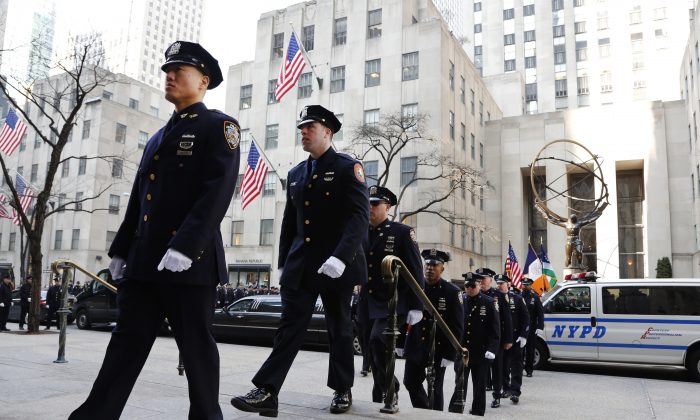 Members of the New York Police Department arrive for the funeral for Euless, Texas police officer David Hofer, Monday, March 7, 2016, at St. Patrick’s Cathedral in New York. Hofer was killed Tuesday, March 1 while responding to reports of shots fired in a park. Hofer was a 2008 graduate of New York University who served in the NYPD for five years before joining the Euless Police Department in 2014. (AP Photo/Mark Lennihan)
New York

NEW YORK— Hundreds of New York City police officers lined Manhattan’s Fifth Avenue in a farewell salute Monday to a former NYPD colleague who was gunned down in Texas.

David Hofer, an officer in the Dallas suburb of Euless, was celebrated at a memorial Mass in St. Patrick’s Cathedral. Mourners including NYPD officers in dress uniform and officers from several North Texas cities prayed before his cremated remains.

A Euless police officer had carried the cherry wood box with Hofer’s ashes bearing his name to the altar, near some daisies and a sign that read, “Blue Lives Matter.”

Hofer’s fiancée, Marta Danylyk, a native of Ukraine, wept quietly, sitting close to his mother, Sonja, and his father, Helmut.

“He went to Texas to make a good life, but once you put a shield on your chest, you’re always in danger,” Pat Lynch, head of New York’s Patrolmen’s Benevolent Association, said after the service.

The 29-year-old Brooklyn native was killed Tuesday while responding to reports of shots fired in a Euless park. As he and his partner approached, the gunman opened fire, mortally wounding Hofer. His partner returned fire, killing the assailant that authorities suspected was high on methamphetamine.

Hofer recently bought a house with his fiancée. He had proposed to her in uniform, devising a surprise plan while she rode with him in a police vehicle, friends told The Dallas Morning News.

He pretended to respond to a report of a suspicious van. Instead, friends and family leaped out of the van as he dropped to his knee and asked for her hand.

On a sunny Monday morning in New York, the lone bagpiped sound of “Amazing Grace” rang over Fifth Avenue as Hofer’s remains were carried out of the cathedral, the seat of New York’s Roman Catholic archdiocese.

Monsignor Robert Ritchie, who presided over the Mass, summed up Hofer’s life in three words from the pulpit: “Respect, honor, love.”