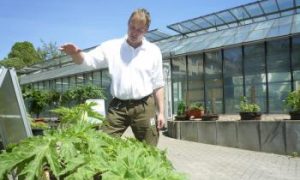 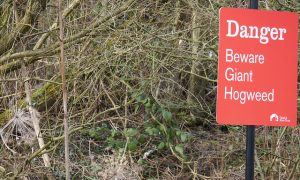 Second Sighting of the Poisonous Hogweed Plant in Alexandria
0 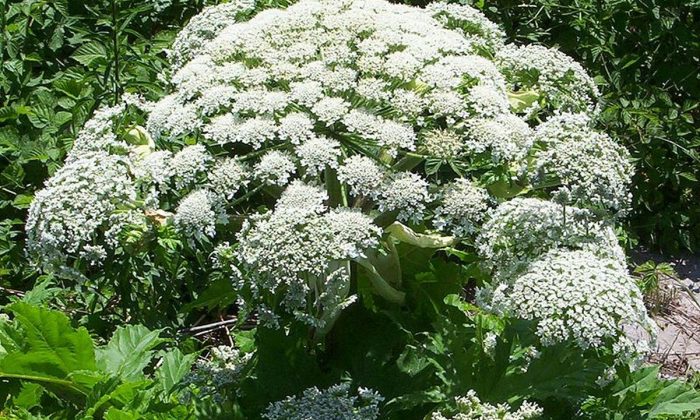 Giant hogweed (This file is licensed under the Creative Commons Attribution-Share Alike 3.0 Unported license)
US News

Officials have issued warnings about a plant found in some areas of the United States, the giant hogweed, that can burn the skin, cause blindness, create painful blisters, and cause permanent scarring.

Last month, officials in New York state issued a warning about giant hogweed, describing it as a “large, invasive, and dangerous plant.”

“Giant hogweed can cause severe skin and eye irritation, including painful burns and scarring when skin exposed to its sap becomes more sensitive to UV radiation. As a noxious weed, is unlawful to propagate, sell, or transport. In addition to health concerns, giant hogweed negatively impacts the state’s ecosystem by crowding out native plants and contributing to soil erosion,” the state wrote.

Naw man. In limerick we had giant hogweed. Does this to people and the burn returns whenever it gets sun pic.twitter.com/icI00hqisk

Giant hogweed, or Heracleum mantegazzianum, is a large, green plant with small white flowers shaped similar to an umbrella. The plants can get up to 14 feet tall and several feet wide.

The sap is especially toxic and makes human skin sensitive to sunlight, causing blisters and burns, the website says.

This stuff can blind you. Do NOT touch it.
Giant hogweed: 8 facts you must know about the toxic plant https://t.co/tKKWeLcvch via @CBSHealth

People who touch the plant should immediately wash the affected area with soap and water and stay away from the sun, the department also noted. It added that people should seek medical attention if they have been burned by the plant.

“If sap gets in the eyes, rinse eyes with water and wear sunglasses,” a spokesperson from the agency told Newsweek. “Seek medical treatment immediately if a rash develops.”

The plant is originally from Russia and the Caucasus country Georgia before it spread to Europe and North America, said the Centre for Agriculture and Bioscience International.

Do not touch this toxic plant! Giant Hogweed has been spotted in Clark County, in Salmon Creek area. Clark County Vegetation Management is working hard to eradicate it. If think you have found it, please email us pictures and provide the location: weed.board@clark.wa.gov pic.twitter.com/jmoHGrU3EQ

“Do not touch this toxic plant! Giant Hogweed has been spotted in Clark County, in Salmon Creek area. Clark County Vegetation Management is working hard to eradicate it. If think you have found it, please email us pictures and provide the location: weed.board@clark.wa.gov,” Clark County officials wrote on Twitter.

The plant for the first time was reported in Virginia last year. A month later, a teenager was treated for serious burns after chopping down the plant, according to local reports.