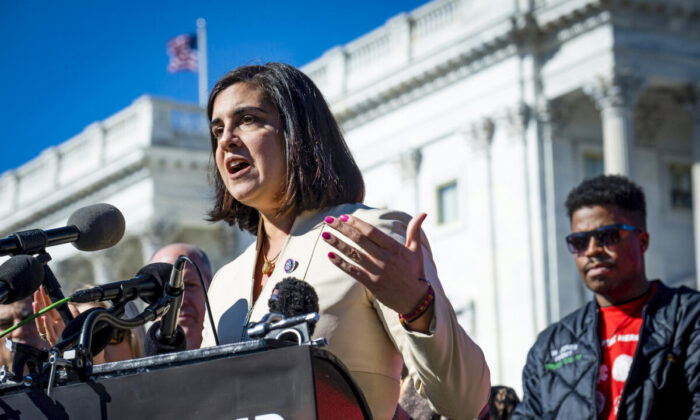 In the wake of New York City’s recent subway shooting, Congresswoman Nicole Malliotakis (R-N.Y.) said New York’s Democrat officials need to start providing more resources to the police and stop being soft on crime if people’s safety and security are to be restored.

“We need to do more to listen to our police, give them the tools that they’re asking for, and help them do their job. Instead, what we have are the politicians that are tying their hands, taking away their resources, and changing laws so people are not being kept behind bars,” Malliotakis told the host of NTD’s Capitol Report during a recent interview.

The congresswoman said she has been working to get the New York Police Department (NYPD) more resources so they can do their jobs. She recently secured $350,000 for Critical Response Command K9-Training and Equipment, $550,000 for personal protective equipment, and $2,000,000 for forensic equipment.

“I’m proud of that because when a lot of politicians are talking about defunding the police, I’m out there doing what I can to deliver more resources to help them do their job.”

Malliotakis said she is opposed to the “radical” bail laws and a push by the new mayor to close Rikers Island and put jails in each of New York City’s five boroughs. She blamed New York’s Democrat-led city government and state legislature for enacting laws that made the city less safe and for taking away funding from police jurisdictions.

“The first thing the city council did that they need to reverse is reinstate criminal penalties for quality-of-life crimes,” she said. “We know, [with] the broken windows theory, is that when you see small crimes, low-level offenses occurring, if they’re not being prosecuted and people aren’t being held accountable, they will affect larger crimes.”

The congresswoman said almost all categories of crimes have gone up—including robbery, theft, and assault—and when these crimes are not punished but instead many criminals are released into the streets because of New York’s bail laws, it’s a recipe for disaster.

Former New York Gov. Andrew Cuomo signed a bill that prevents judges from setting bail for most misdemeanors and non-violent felonies. In addition, Malliotakis said that the judicial system needs to stop being soft on crime for law and order to be restored.

“We have a prosecutor in our city that doesn’t want to prosecute crimes, you have judges who won’t set bail, even when they do have discretion and the prosecutors are pleading. We have a parole board that’s been appointed by our governor that is releasing cop killers and convicted murderers and rapists. All of that has to change if we want to restore public safety,” she said.

“The reality is that we have to support our police, and there’s been too much anti-police rhetoric coming from leaders in our city and state government, and those who are in the federal government as well,” Malliotakis added.