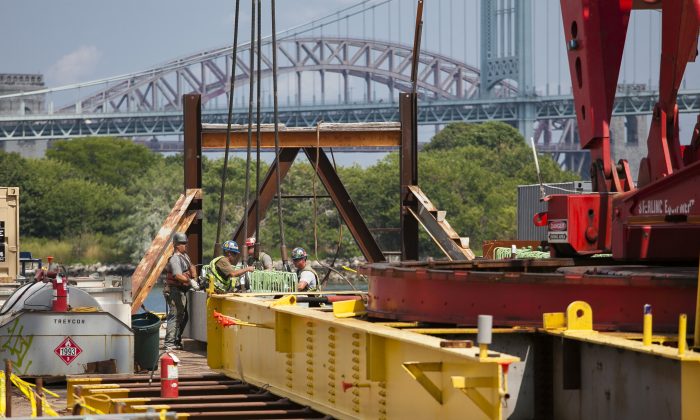 NEW YORK—Though construction for the 91st St. Upper East Side garbage station is already underway and slated for completion by March 2016, city and state elected officials opposed to its existence are not letting up.

On Sunday, they gathered with local residents and anti-garbage-station groups in front of the construction site, calling for a public hearing to review the permits the city obtained from the state Department of Environmental Conservation (DEC).

The permits, issued back in 2009, are due for renewal this October. U.S. representative Carolyn Maloney, state assemblywoman Deborah Glick, city councilman Ben Kallos, and others argue that since the permits were first issued, new federal standards have been established to improve resiliency post-Superstorm Sandy, which will now place the garbage station within a flood zone.

In a press statement released by Maloney’s office on Sunday, she is prepared to file a lawsuit to “compel” the DEC into holding the hearing.

“People’s voices need to be heard through a public hearing,” said Councilman Kallos at Sunday’s gathering. He added that new schools have been built in the surrounding area since the permits were first issued, and the students’ safety needs to be considered.

About 100 people convened at the construction site, cheering loudly at the officials’ words.

Assemblyman Glick said the sanitation department’s promise to waterproof the facility during severe weather conditions is not enough to protect against flooding.

He also believes the department should be required to adjust its construction plans and re-apply for the permits.

But the city has established other steps to prevent floodwater from reaching the facility.

In correspondence between the DEC and state senator Liz Krueger’s office, provided to the Epoch Times by Kallos’ office, the DEC noted that the city made changes to the station’s design after new FEMA (Federal Emergency Management Agency) flood maps were released post-Sandy.

The city also developed a contingency plan in case of severe weather.

In extreme weather, the station will also halt garbage trucks from bringing in additional trash and transport trash containers to safe harbors.

The DEC could not be reached on Sunday for comment, but it said last month that the public would have a chance to comment on the project after it finishes reviewing the permits.