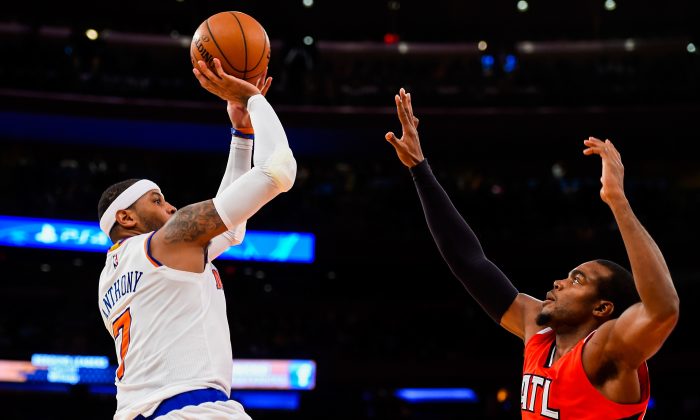 Carmelo Anthony #7 of the New York Knicks shoots over Paul Millsap #4 of the Atlanta Hawks in the first half at Madison Square Garden on November 10, 2014 in New York City. (Alex Goodlett/Getty Images)
NBA

The New York Knicks are floundering early in the season and the team is trying hard to build some momentum and get some wins.

Anthony Gets Advice From Jackson

Carmelo Anthony, struggling to get the triangle offense like the rest of the team, got some advice from new team president Phil Jackson.

“It kind of gave me some insight into how to approach this new system and what to expect and what mindset to have out there on the basketball court,” Anthony told ESPN after the 91-82 loss to the Atlanta Hawks.

Jackson had pulled Anthony aside before the game.

“He wants to step up and help the ballclub with what he’s known for and what his genius is, which is scoring, and sometimes it’s frustrating not to be able to get there and do that,” Jackson said.

Jackson said that Anthony needs to have more energy on defense while attacking the offensive glass.

He also wants Anthony to be aware of ball movement and stay within the system.

“What’s the timing about it, how do you time up this offense. This offense is run on a 4:4 beat … you have a two-count to be a continual threat, and after a two-count, if you’re still holding the ball, you’re holding up the offense. So the ball’s got to move and you have to move it,” Jackson said.

“There were times in the course of the night [while Phil was coaching] when either Michael or Kobe, our primary scorers, would be operating with [the mindset] of, ‘I’m going to score every time I touch the ball.’ You can’t do that in an offense — then the defense can cue up on what you’re doing.

“This is a fine balance, and I’ve talked to Carmelo a little bit about that. The team looks to you to score, and there are times where you’re going to have to pick it up and do that, but for the most part the opportunities are there and you have to be inside that system and play within it.”

Larkin Running Out of Time

Shane Larkin has been thrust into the starting point guard role with Jose Calderon injured but the young player is running out of time to prove himself.

“Atlanta’s second-year backup point guard Dennis Schroeder damaged the Knicks in the pick-and-roll in Monday’s 91-85 loss, finishing with a career-high 14 points and carrying the Hawks down the stretch. The speedy Larkin was a non-factor with two points (1-of-5 shooting) and two assists,” noted the New York Post.

“It helped Pablo Prigioni returned to the lineup, but without Calderon, the Knicks simply aren’t good enough against prospective playoff clubs such as the Hawks, who didn’t even need much of point guard Jeff Teague in this win.”

Jackson emphasized how a strong point guard is needed to guide the team.

“We’re missing a lead guard of the quality of Jose who has the composure and ability to settle a team down,” Jackson said. “Give them organization of the offense with some savvy.”

Jackson is reportedly looking at trade options and Larkin could be a piece in one of them, although some reports indicated that no one would get traded until mid-December, so Jackson has enough time to evaluate the players.

Knicks to Pursue Millsap in the Summer

Paul Millsap has expressed interest in playing under Derek Fisher and will likely be one of the Knicks’ targets during the offseason, or perhaps even in a trade.

“I know Fish. I played with Fisher for a year. He’s always been a good friend for me — not surprised at all he’s coaching. A great guy, always been a great locker-room guy,” Millsap told the New York Post.

“Knows the game well. I knew it would happen at some point.”

Hoops Rumors said that Millsap won’t be sought after before Marc Gasol and LaMarcus Aldridge sign with teams, but “he’ll definitely be pursued by teams looking for an agile power forward who doesn’t shy from physicality, is a capable shooter from everywhere on the floor and can play with his back to the basket.”

“With Amar’e Stoudemire and Andrea Bargnani most likely playing their final seasons in a Knicks uniform, New York will seek to secure Millsap’s services as well,” it added.

“He could be another player to operate in whatever the Knicks are running; it hasn’t looked much like the triangle.”

Gasol is among the other players that the Knicks are expected to target.

NEW YORK—Phil Jackson said Monday he is optimistic and Carmelo Anthony is upbeat, even as the New York Knicks struggle through the start of the season.

The only thing the Knicks’ team president seems bothered by is people focusing too much on the team’s triangle offense — including Commissioner Adam Silver.

The Knicks had lost four straight and were 2-5 as Jackson spoke to the media for the first time since training camp. They were tied for last in the league with just 92 points per game, but Jackson wasn’t necessarily focused on the results.

“I see growth in this team and I’m optimistic that, it’s not always the final score, it’s sometimes how you play,” Jackson said before the Knicks hosted Atlanta. “I think we’re playing the game much better and getting some activity that we like to see.”

Under first-year coach Derek Fisher, the Knicks are running the triangle offense that Jackson used when he led the Bulls and Lakers to 11 championships, most by any coach in NBA history. There has been non-stop talk about the offense and analysis of it, and even a show that director Spike Lee did on MSG Network.

Silver weighed in last week at a community service event when he was asked about the Knicks and said it was clear they were still learning the triangle.

“It was fun to have Spike do the little piece and a humorous part to it, but I wasn’t so humored by the commissioner actually jumping in on top of that, too,” Jackson said. “He doesn’t need to get in on that. There’s enough focus on the triangle. It’s not anything. It’s a system. It’s simple basketball. Just play the game. So we’re over the triangle. Let’s get to business and play it the right way.”

That’s been difficult, particularly for Anthony, who shot 8 for 23, 5 for 21, 5 for 20 and 8 for 20 during the Knicks’ skid. Jackson said he spoke to the All-Star forward Monday and he has urged him to impact the game in other ways beyond his scoring, such as by passing the ball more quickly or trying for offensive rebounds.

“I think that the frustration’s going to be there at times, especially when the tide turns in the third quarter and he wants to step up and help the ballclub at that time with what he’s known for and what his genius is, which is scoring, that sometimes it’s frustrating to not be able to get there and do that. But he seemed very upbeat today when I talked to him,” Jackson said.

Jackson, in his first full season in charge, said he had told the coaching staff to be prepared for a difficult start to the season because there would be limited practice time. It’s gotten even harder with injuries to Jose Calderon and Andrea Bargnani, projected starters who haven’t played yet because of injuries.

Jackson said he has mostly kept his distance and left the coaching to the coaches, though often sends ideas or suggestions to Fisher, who played for him in Los Angeles.