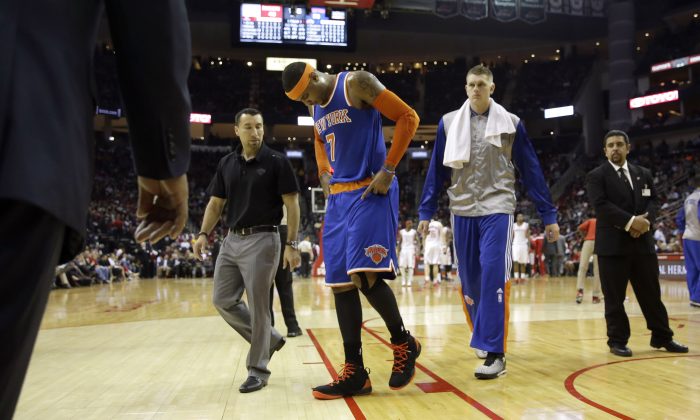 The New York Knicks are trying to turn things around but things have gotten tougher with an injury to Carmelo Anthony.

See the latest buzz below.

Anthony’s injury could impact the rest of the season, and he’ll almost certainly miss the next couple games.

Anthony originally had to leave Monday’s loss to the Houston Rockets with back spasms.

“To be able to fight through something like that is extremely hard to do,” J.R. Smith, who battled back spasms for two weeks in the preseason, told the New York Post.

“When your back is messed up, it controls everything. You can’t run, can barely walk. In his case [Monday] night, he could barely talk. So we got to figure out a way to do it without him. He said very few words. You could tell the pain he was in.”

Anthony had to get heavy-duty pain medication on Monday night as he was still in pain nearly two hours after leaving the game.

“He’s getting some rest. Trying to do what he can to get better. I don’t know if we’ll know enough to really diagnose where he is [physically] or where he’s headed for another day or so,” said coach Derek Fisher.

“Most injuries aren’t necessarily acute or traumatic. Maybe there were some things that led up to it. Back spasms isn’t something you can push it or rush. Until you can actually play without actually being in spasm, there isn’t anything you can really do. Hopefully that will be soon.”

But there are concerns that this will become a season-long issue, such as the spasms that Amare Stoudemire experienced in 2011. Anthony is also dealing with a sore left knee.

Smith said the only way to alleviate discomfort is to lie down and get massages and stimulation treatments.

“You lay down most of the time, you can’t really sit right,” Smith said. “Try to relax as much as you can. Thing is, you don’t have to do much before it just flares up just like that.”

Smith drew attention this week with an Instagram post, claiming that Black Friday is linked with slavery.

“DID YOU KNOW: Black Friday stemmed from slavery? It was the day after Thanksgiving when slave traders would sell slaves for a discount to assist plantation owners with more helpers for the upcoming winter (for cutting and stacking fire wood, winterproofing etc.), hence the name,” read the graphic that he posted, complete with an illustration of a slave auction.

“It’s called Black Friday because businesses get into the black (profit) for the year, because it’s the biggest day,” said another.

Tyson Chandler, traded to the Dallas Mavericks over the offseason, said that he’s moved past his time with the Knicks.

Chandler responded when asked why he and Raymond Felton, who was part of the trade, were branded scapegoats for last season.

“I don’t know why they did that,” Chandler told the Post of Phil Jackson’s remark about needing to change the chemistry with the Chandler-Felton trade in late June.

“Only they can answer that question. I’ve since then moved on and don’t pay it any much attention. I know a lot of the media will be returning and me going against my former team. But in all honesty I’ve kind of swept it behind. It’s in the past and under the rug and I’m moving on with my future here.”

Chandler said a big part of his personal struggles last season was an early injury, but the culture was also part of the problem.

“We were never consistent,” he said. “When you don’t approach things consistently on a day-to-day basis, it’s just a matter of time before things start falling apart and your bad habits are exposed.”

Quincy Acy, acquired during the offseason from the Sacramento Kings, has been one of the few bright spots for the Knicks.

The forward, who has started seven games, is a hustle player who brings high energy. He’s averaging 5.1 points and 6 rebounds.

“He has made the most of this opportunity and is second on the team in rebounds after Amar’e Stoudemire (7.4 RPG),” noted Empire Writes Back.

“In order to turn their fortunes around, the Knicks will need time to put together the right players to run the triangle offense. Along the way, they will need affordable role players to be there for the ride. And someone like Acy can smooth out some of those bumps.”