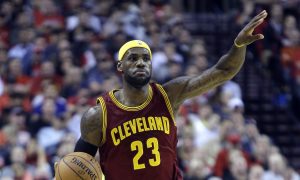 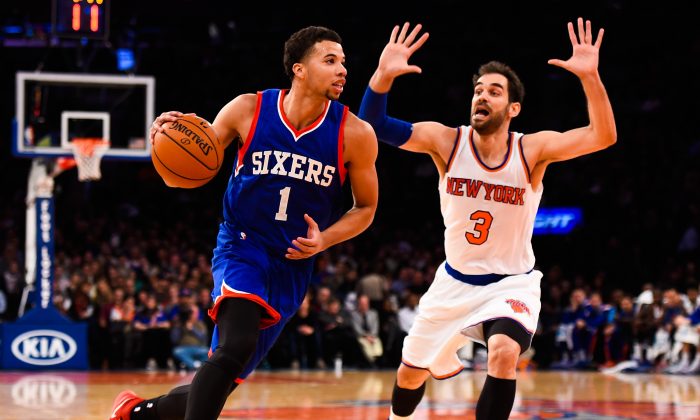 Michael Carter-Williams #1 of the Philadelphia 76ers attempts to drive past Jose Calderon #3 of the New York Knicks in the second quarter at Madison Square Garden on November 22, 2014 in New York City. (Photo by Alex Goodlett/Getty Images)
NBA

The New York Knicks are looking to gain some momentum with the return of starting point guard Jose Calderon, and grabbed a win over the weekend.

Bargnani Still Out as Calderon Returns

Andrea Bargnani did not return on Saturday as expected because of a strained right calf.

Barnani was hurt Friday during practice and an MRI revealed the injury.

The former No. 1 overall pick strained his right hamstring early in the preseason and had finally appeared near the point of returning.

He has battled injuries since coming to New York from Toronto in a trade and hasn’t played in the regular season since January, when he tore a ligament in his left elbow. There’s no new timetable for the 7-footer’s return.

Jose Calderon, though, returned to help lead the Knicks to a win.

Calderon, who was brought over from the Dallas Mavericks in the Tyson Chandler trade, brings a lot of intelligence on the floor, Carmelo Anthony told ESPN.

“Jose knows how to run an offense, especially an offense like this,” Anthony said.

“He can shoot the ball, he can spread the court. But most importantly, his IQ out there on the basketball court, I think is very high. That’s something that, at that position, we’ve been missing.”

Calderon, a 10-year veteran, had three points and three assists in 21 minutes, and joked about his conditioning not being up to speed.

Coach Derek Fisher said that Calderon “is a guy that kind of bonds people together.”

Phil Jackson is the new Knicks team president but still lives in Los Angeles part of the time, and  is back there to spend Thanksgiving with fiancee Jeanie Buss.

“The visual may not sit well with impatient Knicks fans: Jackson relaxing in the sun while the uninspiring Knicks drop back-to-back games at Milwaukee and Minnesota. But Jackson always made it clear to [James] Dolan, the Garden chairman, that he was going to spend some of the season at his beach house,” noted the New York Daily News.

“That’s why Jackson wasn’t in Westchester with Dolan and NBA commissioner Adam Silver to watch the Knicks’ D-League affiliate make its debut. Nor did Jackson travel to Indianapolis to watch star-studded Kentucky crush Kansas. Instead, Steve Mills and Allan Houston were representing the Knicks. During the preseason, Jackson elected not to travel to Hartford, Mohegan Sun or Syracuse to watch his new team. Is that unprecedented? No. Surprising? Absolutely not.

“Jackson isn’t Donnie Walsh, who lived the job 24/7. Jackson’s approach is vastly different. It doesn’t mean Jackson can’t be an effective executive by delegating and watching the Knicks and college games on television. Similarly, Jackson’s style isn’t going to inspire much confidence in the fan base until he acquires more talent and the Knicks start winning.”

The article cited a video interview from TMZ, which caught Jackson at a grocery store in L.A.

The reporter didn’t ask Jackson anything about the struggling Knicks, but did ask if he could boost the Los Angeles Lakers if he were still running the show there.

“A coach always relies on talent to be good,” Jackson said.

NEW YORK—Even with a winless team coming to Madison Square Garden, there was no chance of the New York Knicks being overconfident.

“For us, right now, it’s not like we were playing great,” point guard Jose Calderon said.

They were good enough to beat Philadelphia.

Carmelo Anthony scored 25 points, Amare Stoudemire added 16 points and 11 rebounds, and the Knicks dropped the 76ers to 0-13 with a 91-83 victory on Saturday night.

Calderon made his season debut for the Knicks (4-10), who had lost consecutive games but jumped out to a big early lead and had an easy time against a team that was every bit as bad as its record for most of the game.

“You don’t want to give a team like that no type of edge, no type of confidence, because when you do it can be a dangerous night for you,” Anthony said.

The 76ers are the first team to drop their first 13 games since the 2009-10 Nets lost 18 straight during the worst start in NBA history. The Sixers are nearing their franchise-worst start of 0-15 in 1972-73, when they finished 9-73 for the worst 82-game mark in league history.

They played hard to keep from getting blown out but couldn’t overcome three quarters of dismal shooting that had them trailing by as many as 21 points.

“We all are sticking together,” forward Nerlens Noel said. “We feel like we’re getting closer to our first win.”

Noel had the best night of his young career with season highs of 17 points and 12 rebounds.

“That was Nerlens’ best game. So everybody in Philadelphia is seeing what we’re seeing. It’s slow but it’s coming,” coach Brett Brown said.

Calderon finished with three points and three assists in 21 minutes. The Spanish veteran strained his right calf during a preseason game on Oct. 20, and the Knicks are hoping he can help the flow of their triangle offense.

New York was still without Andrea Bargnani, who was nearing a return from the strained right hamstring that has sidelined him all season when he strained his right calf in practice Friday.

The crowd was announced at 19,812, a sellout, but fans were largely silent during play, as if beating up on the dismal Sixers wasn’t worth cheering.

Philadelphia did manage to get it to 85-77 with under 2 minutes left, but Anthony made consecutive baskets.

76ers: Philadelphia trailed 25-13 after one. The 76ers had led at the start of the second quarter in three of the previous four games after not doing so once before then. … Michael Carter-Williams grabbed four rebounds after he was averaging 6.0. His 6.2 rebounds per game last season ranked second among NBA guards.

Knicks: New York played at home for the only time in a six-game span. The Knicks return to the Midwest for Thanksgiving week, visiting Houston, Dallas and Oklahoma City. … Second-year guard Shane Larkin, who had been starting at point guard during Calderon’s absence, didn’t play.

Some of the 76ers are young and unknown, even to their opponents. Anthony said he knew most of them, though recent call-up Robert Covington from the NBA D-League was a bit of a mystery. “The kid Covington came in at the end, I’m looking at the sideline, I’m like, ‘Is he a shooter? How should we guard him?” Anthony said. “They’re like, ‘Just put a hand up.’ He came out and hit four 3s in a row.” Covington’s 14 points were a career high.