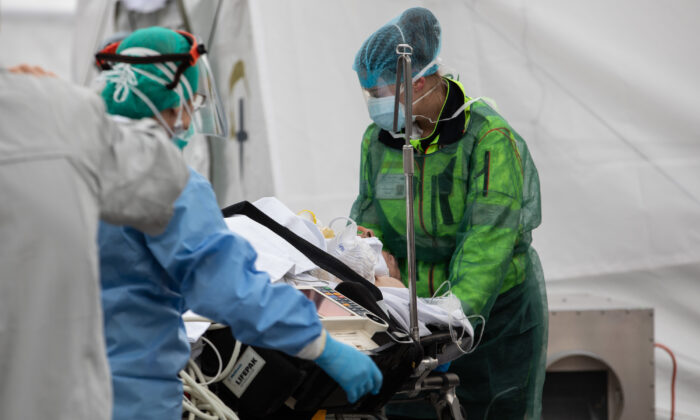 A patient is treated by a doctor at a Samaritan's Purse Emergency Field Hospital in Cremona, near Milan, Italy, on March 20, 2020. (Emanuele Cremaschi/Getty Images)
AMERICA

Very ill coronavirus patients in New York state are being given a large dose of vitamin C, according to a doctor and a spokesperson for a local hospital network.

Dr. Andrew G. Weber, a pulmonologist and critical-care specialist affiliated with Long Island’s Northwell Health facilities, said intensive-care patients with the CCP virus are given 1,500 milligrams of intravenous vitamin C at the outset.

“The patients who received vitamin C did significantly better than those who did not get vitamin C,” Weber told the New York Post. Three to four times each day, identical amounts are re-administered to patients via IV, he added.

Weber said that he looked at reports from around the world about similar vitamin C treatment regimens for COVID-19 patients.

The vitamin C “helps a tremendous amount, but it is not highlighted because” it’s not a unique drug, he suggested.

And Jason Molinet, a spokesman for Northwell Health, which operates nearly two-dozen hospitals around the New York City metropolitan area, added to the newspaper that the antioxidant is being “widely used” elsewhere. He said that about 700 CCP virus patients are being treated in Northwell hospitals, but it’s not clear how many receive the vitamin C treatment.

Weber said the antioxidant is given alongside hydroxychloroquine, an anti-malaria drug, as well as antibiotic azithromycin. Other drugs are also used, he said.

He said that virus patients’ vitamin C levels drop significantly should they suffer sepsis, which is an inflammatory response when their body overreacts to the disease.

“It makes all the sense in the world to try and maintain this level of vitamin C,” the Post quoted Weber as saying.

The Mayo Clinic website, meanwhile, recommends against too much vitamin C, and some health experts have said that it is irresponsible to hoard supplements of the antioxidant in light of reports about its usage in hospitals.

Symptoms of too much vitamin C include vomiting, nausea, diarrhea, heartburn, cramps, headache, and insomnia.

“Remember, for most people, a healthy diet provides an adequate amount of vitamin C,” the website says.