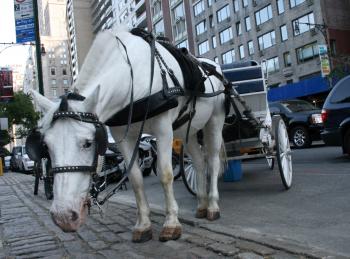 HORSE BAN? City Councilman Tony Avella, who is running for Mayor in 2009, enacted the ‘sponsor privilege’ law on Wednesday. This will force a public hearing for his bill to ban horse-drawn carriages in New York City. (Katy Mantyk/Epoch Times)
US

NEW YORK—Public support to ban horse-drawn carriages in New York City continues to grow, so why has a bill to ban the carriages being ignored by City Council? The Coalition for NYC Animals and the Coalition to Ban Horse-Drawn Carriages declared at City Hall on Wednesday that they are demanding a public hearing.

Council member Tony Avella, who is running for Mayor in 2009, announced he will be enforcing a seldom used law called ‘sponsors privilege’ to force a public hearing. Speaker Christine Quinn, who is in the position to make or break the bill, has so far refused to take action, according to Avella. City Council will now be required to hold a public hearing within the next six months, or face legal action.

“We collected signatures from New Yorkers and tourists, and 30,000 people signed in support of this legislation and yet we don’t have a hearing,” said Avella at the City Hall press conference.

“This industry seems to enjoy a huge political influence, which I don’t understand. They’re (industry representatives) here today…they have threatened people, the coalition was going to have a fundraiser, they had threats made to the restaurant and the restaurant had to cancel the event… and these are just a few examples.”

Many people still believe that the horse and carriage business belongs in Central Park, and argue that it is good for tourism and that people riding in horse drawn carriages is a part of New York history, so why the fuss? Avella points out that the industry only began in New York in the 1940’s and horses have only been permitted to go beyond Central Park since the 1970’s.

One leading argument to remove the horses is the risk they cause on the streets.

Another speaker at City Hall, Adita Birnkrant from ‘Friends of Animals,’ explained the reason behind the complete ban, rather than a seemingly more realistic compromise.

“They are prey animals, their response to the things that make them scared, the things that make New York ‘New York,’ is to run. What does that mean? That means that this is a big public safety risk and there’s just no way to get around that, unless we can take away all the noise and the people and the traffic and the chaos… we need to do the right thing for the horses which is to get them off the streets, and put them in sanctuaries where they can live out their lives in peace and leave these miserable lives of abuse,” said the Birnkrant.

If the bill is passed, the horses will be retired, and according to Birnkrant there are many groups across the country willing to adopt the retired workhorses.