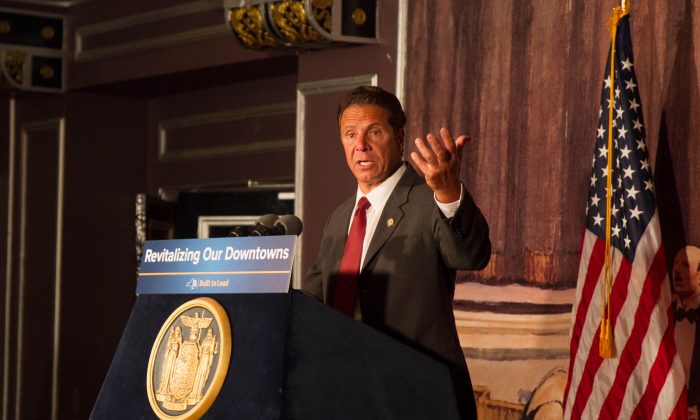 NEW YORK—A former top aide to Democratic Gov. Andrew Cuomo was among eight people charged Thursday in a bribery and fraud case that threatened to tarnish Cuomo’s efforts to revitalize the upstate economy and the reputation of a governor who until now had been spared from a federal prosecutor’s public corruption crusade.

Joseph Percoco, Cuomo’s former executive deputy secretary and one of his most loyal advisers, was named in a criminal complaint filed in Manhattan federal court. Percoco also worked for the Cuomo’s father, Gov. Mario Cuomo. At the former governor’s funeral last year, Andrew Cuomo called Percoco “my father’s third son who sometimes I think he loved the most.”

The eight individuals facing charges were expected to appear in court Thursday. U.S. Attorney Preet Bharara scheduled a news conference for noon to discuss the case.

A Cuomo spokesman declined to respond publicly when contacted by The Associated Press. Percoco’s lawyer wasn’t initially available for comment.

The federal probe revealed a web of individuals and businesses tied to Cuomo that were poised to profit from the Buffalo Billion, Cuomo’s signature effort to boost New York’s second-largest city, as well as Nano, an initiative effectively led by Alain Kaloyeros, president of SUNY Polytechnic Institute who was also named in the complaint. Kaloyeros wasn’t immediately available for comment.

According to the federal complaint, Percoco took more than $315,000 in bribes from 2012 through 2016 from Syracuse-based COR Development and Competitive Power Ventures, an energy company looking to build a power plant in the Hudson Valley. Todd Howe, a consultant for the two companies and former Cuomo associate, set up bank accounts and a shell company to funnel bribes, including payments to Percoco’s wife, the complaint said.

Howe pleaded guilty to several federal charges, including conspiracy to commit fraud, extortion, bribery and wire and tax fraud. His attorney, Richard Morvillo, said Howe “has accepted responsibility for his actions and will testify truthfully if called upon.”

Percoco resigned as Cuomo’s executive deputy in 2014 to lead Cuomo’s re-election campaign. He rejoined the administration in late 2014, then quit a second time in January to become a vice president at Madison Square Garden.

Cuomo’s office said in April that Bharara was examining possible undisclosed conflicts of interest and improper bidding. The administration launched an internal review, and Cuomo promised to “throw the book” at anyone found to be violating the law.

According to state financial disclosures, Percoco also made as much as $125,000 by becoming a consultant for COR Development and CHA Consulting, two firms involved in Buffalo Billion and Nano. The firms are also big Cuomo political donors.

Cuomo said Percoco told him he might take consulting clients. But he never asked Percoco to identify them.

Peter Galbraith Kelly, an executive at Competitive Power Ventures, is accused in the complaint of conspiracy and paying bribes to Percoco. The company, based in Braintree, Massachusetts, didn’t immediately reply to queries.

Authorities accused Percoco of conspiring with Kaloyeros and Howe to rig bidding in the Buffalo Billion project and deceive Fort Schuyler, the state-funded entity awarding the lucrative contracts, so they would go to COR Development and Buffalo contractor LPCiminelli. They said Kaloyeros, who oversaw the application process for many of the state grants, retained Howe to help him, and Howe in turn solicited and received bribes.

“Howe worked with Kaloyeros to deceive Fort Schuyler by secretly tailoring the required qualifications for those development deals” so COR and LPCiminelli would win the contracts “without any meaningful competition,” the complaint said.

Ciminelli and COR didn’t respond to requests for comment.