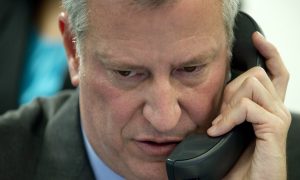 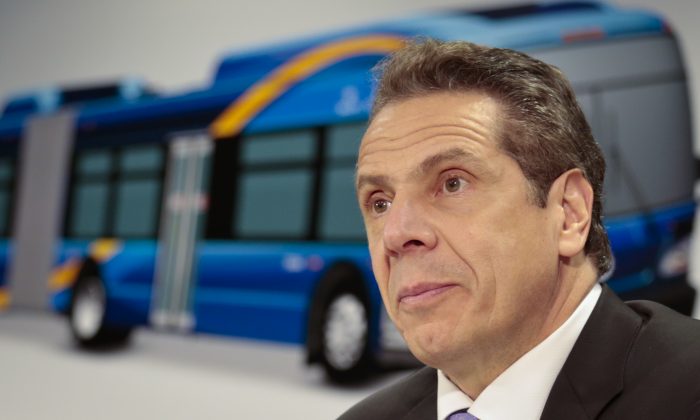 Gov. Andrew Cuomo listens during a news conference announcement that new buses, like that shown in a background display, will be introduced in Queens starting early April equipped with wifi and rechargeable ports, Tuesday, March 8, 2016, in New York. (AP Photo/Bebeto Matthews)
New York

NEW YORK—Gov. Andrew Cuomo is defending a former aide and campaign manager who is under federal investigation.

Joseph Percoco was the Democratic governor’s executive secretary until early January. In 2014, he took a leave of absence from government to work for Cuomo’s campaign and for companies that did business with the state.

“I’m saying I’ve known Joe Percoco for many years and he’s a good man and I’d be shocked if he did anything wrong, but let’s get the facts and then we can make our own decisions,” Cuomo said Monday night after attending the Association for a Better New York’s annual Spirit of ABNY Awards in Manhattan.

Messages seeking comment from Percoco and his lawyer were not immediately returned.

New York law prohibits state employees from financial conflicts of interest and trading on their official influence for personal gain.

Michael McGovern, a lawyer representing CHA Consulting, did not comment on Percoco’s disclosure but told The New York Times that the company was cooperating with the U.S. attorney’s office.

A spokeswoman for COR Development, Maggie Truax, told The Post-Standard on Saturday that it did not hire or pay any money to Percoco.

On Friday, the governor announced that Schwartz had been hired to review the governor’s upstate economic development initiative after learning that U.S. Attorney Preet Bharara was investigating potential conflicts of interest and improper bidding regarding the Buffalo Billion initiative.

The Buffalo Billion centerpiece is a $750 million factory the state is building for SolarCity.