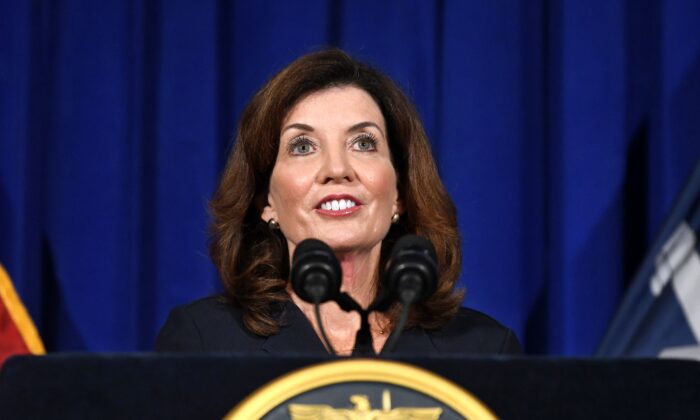 “Last night,” the Democrat governor wrote on Twitter Tuesday, “I took bold action and signed an executive order that will alleviate potential staffing shortages in our hospitals and other health care facilities across New York State.”

“My desire is to have the people who’ve been out there continue to work in their jobs, working in them safely,” she said Monday at a news conference in the Bronx. “To all the other health care workers who are vaccinated, they also deserve to know that the people they’re working with will not get them sick.”

It’s not clear why Hochul suggested that someone who is vaccinated against COVID-19 would be at a higher risk of getting sick from someone who isn’t vaccinated. Some studies have shown that fully vaccinated individuals can transmit the virus, although federal health officials have asserted that the vaccine protects against serious illness and hospitalization.

Over the weekend, Hochul said that she would direct the National Guard to potentially replace health care workers who were terminated or suspended from their jobs due to their vaccination status. Her office also raised the possibility of hiring accredited nurses from other states and other countries, or those who are retired.

As the deadline on Monday night loomed, critics noted that firing or suspending potentially thousands of health care workers in the middle of a pandemic could backfire. A federal judge in Albany earlier this month had temporarily ordered New York state officials to allow religious exemptions for the vaccine mandate for health care workers.

Several New York hospitals confirmed to Reuters that the process of terminating or suspending workers started on Monday, and some said that elective surgeries would be postponed.

Erie County Medical Center in Buffalo suspended elective inpatient surgeries and had stopped accepting intensive-care patients from other hospitals as it prepares to fire hundreds of unvaccinated employees, spokesman Peter Cutler told the news outlet. Cutler said the decision to curtail some operations would inconvenience patients and hurt hospital finances, while adding that the procedures bring in about $1 million per week.

“We had to make a decision as to where we could temporarily make some changes so that we could ensure other areas of services are as little affected as possible,” Cutler said. “Financially, it’s a big deal.”

Dr. Mitchell Katz, the head of NYC Health + Hospitals in New York City, said at a news conference that 5,000 of the city’s 43,000 employees of public hospitals haven’t received the vaccine.