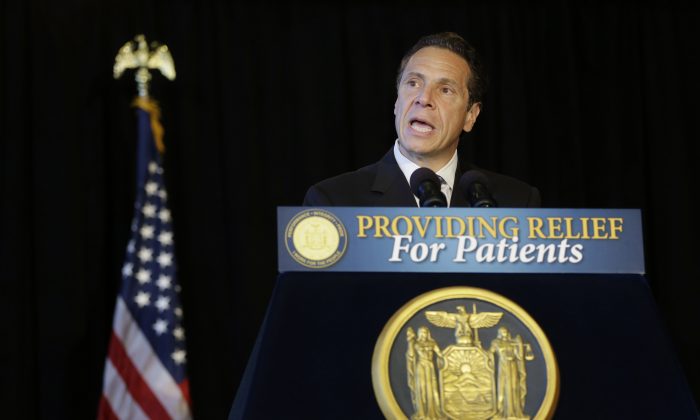 NEW YORK—Gov. Andrew Cuomo signed into law a bill on Monday making it legal to manufacture, prescribe, and use medical marijuana in New York state.

The legislation creates a seven-year program which strictly regulates how the drug will be prescribed, used, and manufactured. Cuomo, who opposed legalizing marijuana for recreational use, called the bill one of the smartest and strictest medical marijuana bills in the country.

“It’s only fitting that now that we have identified an advancement in medicine in medical marijuana that the state of New York takes that step at this time. There is no doubt that medical marijuana can help people,” Cuomo said at the New York Academy of Medicine in Manhattan on Monday.

The bill does not permit smoking of the actual plant, but authorizes a range of other uses, including salves, sprays, and vaporizers.

A set of key provisions is aimed to ensure that the drug is being used only for medicinal purposes. Medical marijuana will only be available to patients with one of several serious medical conditions, including cancer, HIV and AIDS, Lou Gehrig’s Disease, Parkinson’s Disease, multiple sclerosis, and epilepsy, among others. The commissioner of the Department of Health has the power to add or remove diseases from that list.

Punitive measures are in place for patients who misuse or resell the drug and doctors who knowingly prescribe it to people who do not need it. Patients can’t own more than a 30-day supply of the drug and must keep it in its original packaging.

The manufacturers and distributors of medical marijuana will have to register with the state. The law allows only five such organizations, each of which can open up to four dispensaries statewide. These establishments will have to adhere to rigorous security and record-keeping standards.

Revenues from a 7 percent tax on medical marijuana sales will be split between the counties in which the drug is manufactured and dispensed, the State Office of Alcoholism and Substance Abuse Services for drug abuse prevention programs, and the Division of Criminal Justice Services for law enforcement support.