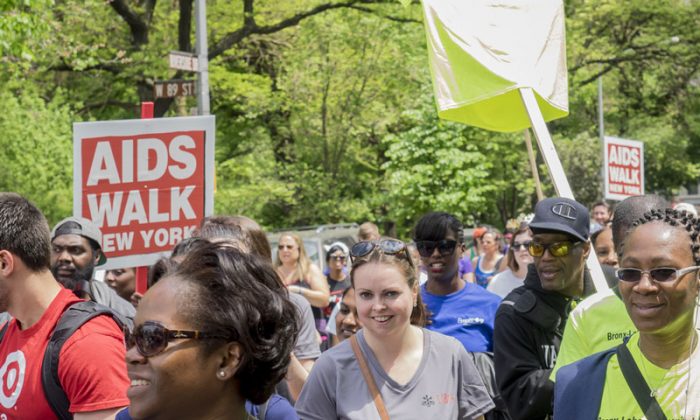 NEW YORK—The Cuomo administration unveiled an ambitious plan on Sunday to reduce new HIV infections in the state through increased HIV diagnosis, treatment for those infected with HIV/AIDS, and preventative treatment for those most at risk of getting the disease.

The number of people living with HIV/AIDS has increased as medical advances have elevated lifespans. The program aims to bend the curve so that the number of new HIV infections will be lower than the number of HIV-related deaths. The goal is 750 or fewer new infections by 2020.

Some of the first known AIDS cases were diagnosed 33 years ago in New York. “Thirty years ago, New York was the epicenter of the AIDS crisis,” said Gov. Andrew Cuomo in a statement. “Today I am proud to announce that we are in a position to be the first state in the nation committed to ending this epidemic.”

The plan would work to keep diagnosed HIV patients on their treatments to prevent further transmission and provide preventative care to those who are not yet infected but at high-risk for HIV.

According to the Centers for Disease Control and Prevention, regular intake of pre-exposure prophylaxis by those at high-risk for HIV can reduce the infection rate by up to 92 percent.

The administration said that the program will save the state $317 million in medical costs by 2020. Each averted HIV infection saves almost $400,000 in lifetime medical costs.

The enhanced effort to identify and treat infections builds on policies that are already enacted in this year’s budget, according to the governor’s office. These include allowing HIV tests to be given on verbal consent, the sharing of government data with health care providers to retain patients in treatment programs, and subsidies to keep rents from rising above 30 percent of an HIV patient’s income, as it is understood that stable housing increases the continuity of treatment.

The Cuomo administration also recently negotiated a volume discount agreement with AbbVie Inc., Bristol-Myers Squibb Co., and Gilead Sciences Inc.—together they make up 70 percent of the market for HIV drugs. Other companies are also in talks to join the agreement.

New York’s program is in line with a growing trend in HIV/AIDs epidemiology that sees pre-emptive treatment, known as Pre-Exposure Prophylaxis (PrEP), as a way of eradicating the disease.

“If you could focus on getting PrEP to people who engage in risky behaviors, then you could get quite significant results,” said Sabina Alistar, a Stanford researcher, in an interview with Scope, a blog published by Stanford Medicine.

“The goal is ambitious, but grounded in reality. New York state has always been a leader and center of innovation in the fight against HIV/AIDS,” said Mark Harrington, executive director of the Treatment Action Group, an AIDS research and policy think tank, in the release.

*Image of “AIDS walk” via Shutterstock