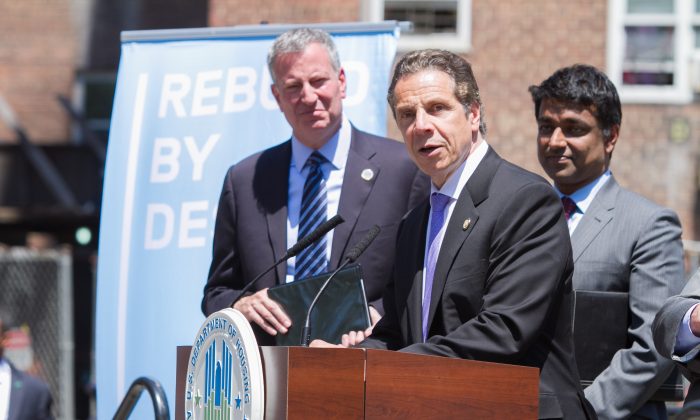 He had $33 million in January, but has spent $6.7 million since then. His Republican challenger and current Westchester County Executive Robert Astorino, starting from zero, has raised $3.4 million and spent a little under a million over the same period of time, according to campaign filings released Tuesday afternoon.

Zephyr Teachout, Cuomo’s opponent in the Democratic Primary, hasn’t disclosed her fundraising yet.

Astorino has acknowledged the disparity in campaign fundraising between Cuomo and himself, but remains undaunted. At a campaign stop in Brooklyn on Sunday, he touted his successful 2009 bid for the county executive of Westchester despite being outspent 5 to 1 by then-incumbent Democrat Andrew Spano.

“Don’t tell me we can’t win this race [against Cuomo], because I feel it’s the exact same,” Astorino told the crowd at the Brooklyn Young Republican Club.

Incumbent Democrat Eric Schneiderman has yet to release his fundraising in the past half-year. His GOP opponent John Cahill, who served as chief of staff under New York Gov. George Pataki, has raised $1 million thus far.

Incumbent Democrat Tony Avella raised more than $132,000, his Democratic challenger John Liu more than half a million dollars in the same period. Liu was New York City’s comptroller from 2010 to 2013, and unsuccessfully ran for mayor in 2013.