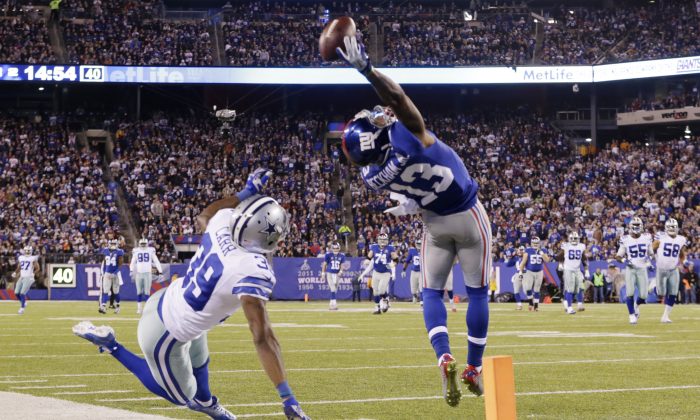 FILE - In this Nov. 23, 2014, file photo, New York Giants wide receiver Odell Beckham Jr. (13) makes a one-handed catch for a touchdown against Dallas Cowboys cornerback Brandon Carr (39) in the second quarter of an NFL football game in East Rutherford, N.J. The one-handed catch by Odell Beckham Jr. that became the most talked-about play from Sunday did more than just boost his standing with the New York Giants, it paid off a routine growing popular among many skill players of practicing the impractical, one-handed circus grab. (AP Photo/Julio Cortez, FILE)
NFL

After this week’s tough loss to the Cowboys, the New York Giants  will play the Jaguars on Sunday. Here’s some of the latest buzz and rumors:

The Giants are in the midst of a six-game losing stream.

“We are going to Jacksonville, they have one win, and we have three wins,” Manning told the NY Daily News. “I don’t think we are in a position to label anybody or to think we are better than anybody. We have to play well. We’ve got to find a way to get a win, we’ve got to put 60 minutes together and play great football for that whole time.”

Coach Tom Coughlin added that the Jaguars almost beat the Cowboys in London.

“We’re all well-aware of the fact that they went over to London and lost to the Cowboys, 31-17, and turned the ball over down close a couple of times when they could have had points, so we’ve got to look at all of those things,” he told the paper.

For much of his career coaching the Giants, Coughlin has been subjected to calls that he should be fired.

This season is no different.

NY Post sportswriter Steve Serby suggests that Coughlin “should stay and coach the Giants in 2015 and 2016, and then be part of the search committee to find his successor in 2017, which would mitigate any lame-duck status since he would be working shoulder to shoulder with the powers that be.”

He said that it “would be both an honorable exit on his own terms, which he deserves, and would enable ownership to hold true to its mantras of continuity and stability and stiff-arm further upheaval.”

A few weeks ago, a New York Times report cited what co-owner said before the 2014 season started.

“That’s the one thing I don’t worry about at all,” Mara said at the time. “This coach has the pulse of this team, and they do respond to him. I watch practice almost every day, and I’m in the locker room after games, and you see that. I’ve been in other situations that it becomes obvious that they’ve tuned the coach out, and I’ve never seen that since 2004 — never since Tom has been here.”

In the aftermath of Odell Beckham jr’s legendary catch against the Cowboys on Sunday, there were comments that he couldn’t have done it without the specialized wide receiver gloves.

“The gloves definitely do help,” he told Newsday.

“It’s part of the game, part of football. You can wear gloves. I don’t think it’s against the rules. But they definitely do help.”

It’s worth noting that the vast majority of receivers wear gloves from either Nike or Under Armour.

“They’re a huge help,” Giants wide receiver Kevin Ogletree told the publication. “They make your hands bigger. It’s another layer . . . They help me.”

Coach Coughlin also talked this week about the changes he made to the offensive line.

“I wanted to try and create some spark and be able to run the ball a little bit,” he told ESPN after the game.

“In last week’s game, there wasn’t any run. I wanted to be able to have some balance to our offense, and if that’s what it took, then so be it.”

It’s unclear if he’ll go with the change.