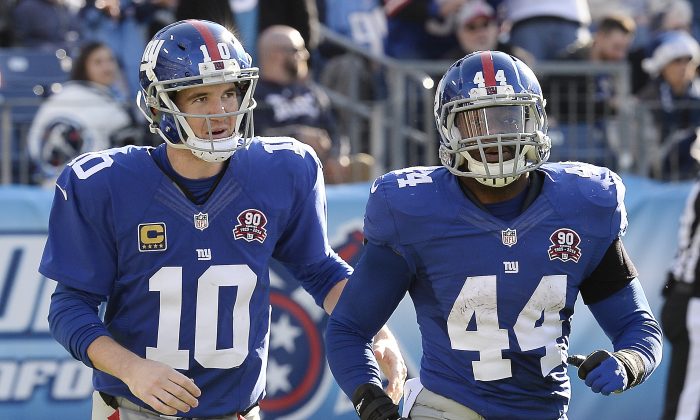 New York Giants quarterback Eli Manning (10) congratulates running back Andre Williams (44) after Williams scored a touchdown on a 50-yard run against the Tennessee Titans in the second half of an NFL football game Sunday, Dec. 7, 2014, in Nashville, Tenn. (AP Photo/Mark Zaleski)
NFL

The New York Giants play the St. Louis Rams on Sunday afternoon. Here’s some of the latest updates:

The New York Post on Monday said there’s a high certainty that coach Tom Coughlin will stick around next season.

The report, citing a source close to the team, said there’s a “99.9 percent” chance that Coughlin will come back.

Both Giants owners said they had “no comment” on the matter.

The column added: “Yes, he has missed the playoffs three straight seasons. But his voice is still being heard. His preparation isn’t the reason the Giants are 5-9. This isn’t about sentimentality. It’s about keeping a Hall of Fame coach where he belongs. Coughlin once wrote a book entitled “A Team To Believe In.” The Giants still have A Coach They Believe In.“

Giants WR Reuben Randle was benched in the first quarter against the Redskins.

The third-year receiver has been having issues all season long.

“Yeah, you don’t like to see your starting receiver get in trouble,” Manning told the NY Daily News. “It kind of throws off the rhythm of things, being in tune with what’s going on out there. You just want to have all your weapons out there. You don’t want to see a guy having to sit for a quarter or whatever it is.”

Coughlin told the NY Post: “That’s between Rueben and I.”

“Things not always going to go your way, so when adversity hits you, got to pull through and make the best of it,” Randle also diplomatically told the paper.

Beckham Jr. could have played for USMNT

Odell Beckham Jr. could have played soccer for the US Men’s National Team.

“I played seriously until I was about 13 or 14 then the (US) national team wanted me to try out for it,” Beckham Jr. told the NJ Star-Ledger. “It’s just so much for a young kid to have to decide that. You’d have to leave your family. But I always played in the premiere leagues. I was 11 playing U-14, stuff like that. I was always playing up.”

He also told TMZ that he didn’t want to play for the national team due to family reasons.

Beckham also played for LSU to stay close to his home.

With his three-touchdown game on Sunday, Beckham is making a case for being offensive rookie of the year.