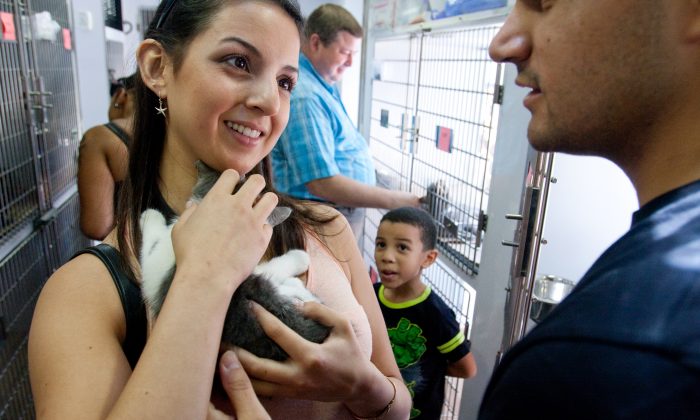 NY Environment Enthusiasts Reach Out to the Public

NEW YORK—For its 25th birthday, Ecofest celebrated at the crowded Times Square. The place best known for its bright lights and tourist attractions became a platform to promote environmental responsibility and the preservation of natural resources.

Vendors stretched over two blocks on Broadway, between 45th Street and 47th Street. “We do it in a fun filled environment,” said event producer Nanci Callahan.

A solar-powered stage served as a show highlight, where models showed off the latest designs in eco-fashion, American folk singer Pete Seeger crooned, and environmental rapper Presice led the audience in a call and response, where he called “eco,” and the audience responded ”swag.”

“I would like to see it here every year,” Callahan said. In previous years the festival has taken place at other venues, like Central Park.

Vendors varied in their approaches to being environmentally responsible—whether it be how to eat, drink, wear or drive environmentally friendly products—but each shared a common goal of education.

“We’d like to give them the opportunity to get their message out,” Callahan said.

Eco-fashion designer Melissa Lockwood said her company IQtest is about being intelligent about the use of fabrics.

She typically rummages through garment factories and picks up pieces of fabric that have been thrown away, which she then uses to make her own fashion line.

“I really want to influence the garment industry to realize its resources,” she said.

The non-profit Animal Care & Control (ACC) has been participating in the festival for five consecutive years. Stephen Nasto, an adoption coordinator, who adopted Cindy, a cat, last week, said it’s important to get rid of the stigma that shelter animals are not a good source for pets. “We do have really amazing animals,” he said.

The ACC receives around 30,000 animals per year. One dog and one cat were adopted by noon at the Ecofest.

Gary Calwhite, a promoter for Multipure Drinking Water Systems, said that his concern about people’s health motivates him to educate others about the dangers of contaminated water. “I’d much rather affiliate with people that have health, and exude optimism and robust energy,” he said.

Calwhite was promoting a water filter which he said is one of the few water purifying systems in the nation certified by NSF, an independent product consumer safety standard.

When Ecofest began, there weren’t even any eco-friendly cars to display. The festival could only promote eco-friendly transportation. When the first GM Impact came out, which is the prototype of the electric GM EV1, Ecofest was the first to feature it.

Even though making it to Times Square took a lot of work and required many permits, Callahan said, “It’s something that I thought was really important.”