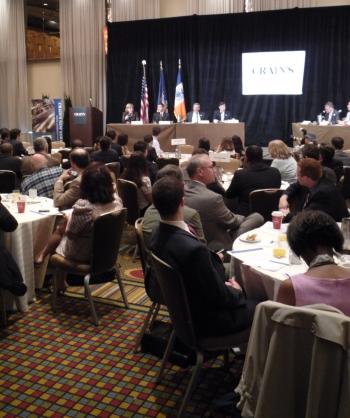 Candidates take part in the Crain's New York Breakfast Forum at the Hyatt.
US

NEW YORK—With 48 days left until the comptroller primary elections, the four comptroller candidates are kicking off their campaigns. They started off at the Crain's New York Breakfast Forum at the Hyatt Wednesday.

On the future comptroller's plate will be how to pay for an aging population's pensions, raising revenue and stimulating economic growth while closing a budget gap of $500 million, and a debt of $59 billion. In light of Council Member Miguel Martinez's recent resignation in anticipation of being charged for channeling city council funds to a nonprofit group, the new comptroller will also face questions of how to promote integrity among elected officials.

The race so far has had its share of drama. Critics accuse Katz and Yassky of taking contributions from developers—Katz especially as she chairs the City Council's Land Use Committee. But she says her ties to the real estate industry is a plus, not a detractor.

Latecomer to the race John Liu was under fire from Katz and others when he decided to run for comptroller. Queens Democratic Party Executive Secretary Mike Reich told the Daily News that the he lamented the idea that three Queens council members will be running for the position. "I don't know why he would do this; the more people there are from Queens in the running, the less likely it is that someone from Queens will win,” he said.

In light of Liu’s seemingly spontaneous decision, Katz said in a statement that New Yorkers, “Deserve a comptroller who respects and champions this position for the importance that it holds, not someone who views it as a second choice.”

The primary election will take place on September 15.