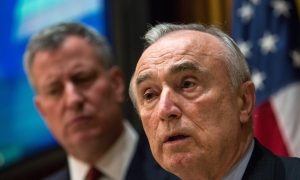 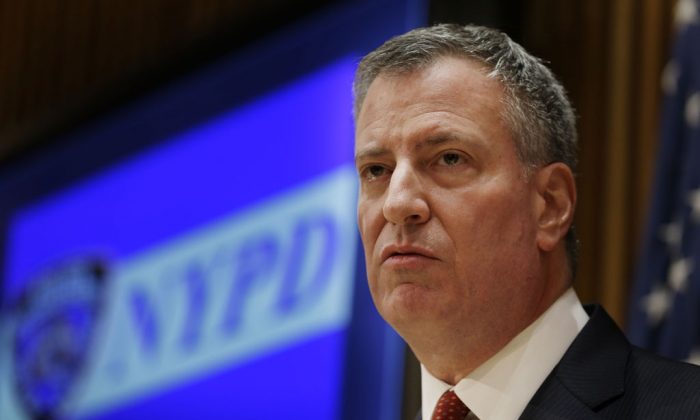 NEW YORK—New data from the police department reveals a striking drop in arrests for drugs, summonses for low-level offices like public drinking and urination, and traffic violations.

Traffic violations and criminal court summonses both decreased 94 percent compared to the same time period last year, according to Compstat data obtained by the New York Post. The data is for the week starting Dec. 22, the first working day after two police officers were shot by an emotionally disturbed individual in Brooklyn as they sat in a marked patrol car.

The meeting was less about labor contracts, and more about clearing the air.
— Joseph Mancini, spokesman, Patrolmen's Benevolent Association

The killer aimed to kill New York Police Department officers Rafael Ramos and Wenjian Liu in an apparent retaliation for the controversial deaths of two unarmed black men at the hands of police, social media posts by the killer revealed.

Drug arrests by cops working at NYPD’s Organized Crime Control Bureau dropped by 84 percent, from 382 to 63.

The police murders were the first the city has experienced in years, and it has the NYPD rattled according to interviews with police.

After the two killings, it was widely reported that the Patrolmen’s Benevolent Association sent out instructions to only arrest when “absolutely necessary” and double up on patrols. The source of the memo remains unsubstantiated.

Fred Siegel, a scholar-in-residence at St. Francis College in Brooklyn and a fellow at Manhattan Institute, said without the data it was hard to determine whether the reported slowdown was limited to just a few precincts.

Current NYPD detective specialist and auxiliary unit coordinator Martin Green, who spoke to the Epoch Times Tuesday, said that because of double patrols, “half the amount of work’s getting done.”

“It’s not a slowdown. It’s not them going ‘Hey, I got the blue flu,'” he said, referring to a phenomenon whereby police officers claim to be ill without being ill to support union contract demands.

“Regardless of what goes on, we do our jobs.” He added: “It’s just because of manpower. We can only do half the job right now.”

Police morale has been low for a while. Not only has the loss of life affected the force, but a contract dispute between Mayor Bill de Blasio’s administration and the police unions has also played out painfully in public, with plenty of disrespectful comments being thrown around.

And there have been a number of incidents where small groups of police officers have made a show of turning their backs on de Blasio in public, notably at the grand Saturday funeral of Ramos, one of the slain officers.

Police unions have been outraged over the past months, particularly when the mayor said that his biracial son had to be careful when encountering the police.

“The implication was that the NYPD is infused with racism,” said Siegel.

The mayor and police commissioner face a major problem of low morale in the police department, said Siegel. “Bratton and de Blasio can’t live with a demoralized police force.”

In an apparent effort to ease tensions, de Blasio met with all five police union leaders on Tuesday. At the newly opened police academy in Queen behind closed doors, de Blasio spoke with leaders for over two hours.

The meeting was less about labor contracts, and more about clearing the air, according to Patrolmen’s Benevolent Association spokesman Joseph Mancini.

Police union head Patrick Lynch said in a briefing with media after the meeting, “There was no resolve, and our thought here today is that actions speak louder than words.” He emphasized that safety was one of the unions’ top concerns.

The mayor and police commissioner “remain committed” to keeping crime down and supporting police and improving police-community relations, according to a statement from de Blasio’s office released after the meeting.

Siegel said that he was slightly optimistic about the mayor’s negotiations with the police unions and the potential for an overall relationship.

If the mayor spoke carefully and didn’t get into new conflicts at the meeting and in the future, “a modicum of normality will be restored.”