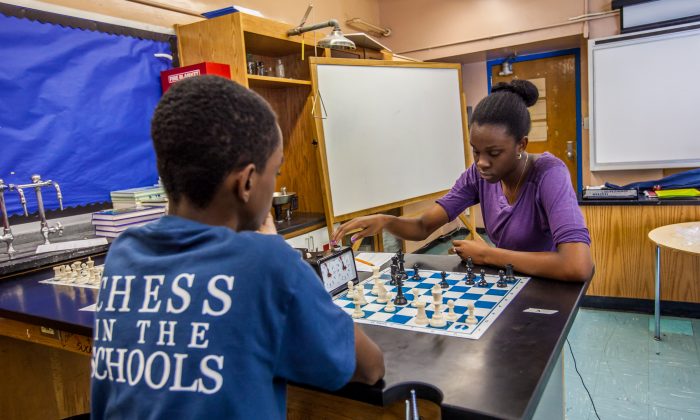 NEW YORK—The whole classroom was silent as the best K–12 chess players in New York City focused on their boards at the first round of the Columbus Day Tournament.

The competition was held at the Frederick Douglass Academy in Harlem with over 800 children and youth registered to pit their wits against their peers.

The tournament was organized by Chess-in-the-Schools, a nonprofit set on “improving academic performance and building self-esteem among inner-city public school children,” the tournament website reads.

Keyron Jarvis, one of the front-runners of Monday’s tournament, seemed quite sure of his skill.

“I expect nothing but first,” Keyron said. “Not to be overconfident, but I feel like I’m the best person in this tournament.”

Keyron started to play chess when he was in first grade, but didn’t compete until two years later. Since then he enjoyed his share of successes, including 25th place in the high school nationals for players rated under 1200.

Chess players are rated on a scale that starts at 100 and goes well over 2,000 for professionals. Keyron is currently rated at over 1,800.

Yannhely Rodriguez competed in the K–12 Novice category. She also started with chess in the first grade, but didn’t take it that seriously at the time and stopped playing for a few years. Yannhely is now trying to “get back in there” by training and studying the game.

Though she is not in the leading cohort, Yannhely likes to play chess because it “makes her think” and because she feels the benefits.

“You don’t really get distracted as easily,” Yannhely said. “You need a certain intellectual thing. You need to concentrate a lot and it actually helps you in everyday life as well.”

The Chess-in-the-Schools program taught chess to more than 400,000 students over almost three decades of operation, according to the program’s website. Any New York City public school where more than 60 percent of the students are eligible for free or reduced cost lunch can apply. But, according to the website, there are no openings at the moment.

Teachers, however, are encouraged to attend its Teacher Training Institute, where they can learn the basics of the game and how to establish and run the program themselves. Thanks to a City Council grant, participating teachers receive all the necessary equipment, including the chessboards, for free.