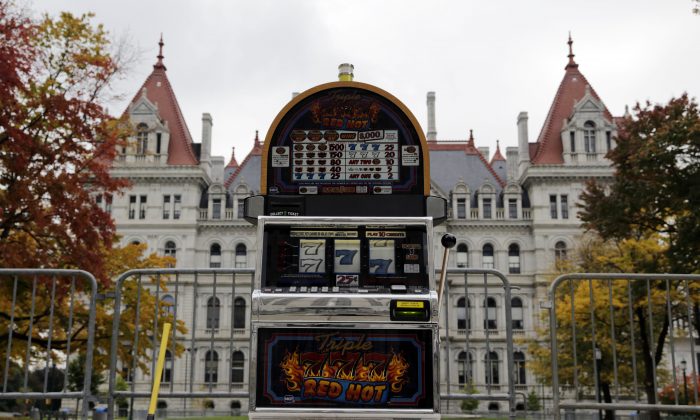 A slot machine sits in front of the state Capitol before anti-casino activists smashed it with a sledge hammer in Albany, N.Y., Oct. 15, 2013. A referendum on allowing casinos in the Catskills will be held Nov. 5. (Mike Groll/AP)
New York

NEW YORK—Only 90 miles from the city, the Catskill Mountains used to be a favored retreat for New York City residents in the mid-20th century. Bungalow colonies sprang up as families wanting to escape the summer heat bought second homes.

“Over the last 30 years [Sullivan County] probably lost two-thirds of its wealth from the great days of the Concord and Grossinger’s. So there is a lot of pain in that district, there is a lot of unemployment,” said state senator for the region, John Bonacic, speaking at an Oct. 21 forum about an upcoming casino referendum.

To remedy the economic decline, proponents sought to bring casinos to the Catskill Mountain region for more than four decades.

Gov. Andrew Cuomo has been propelling the legislation in favor of casinos since 2011 as part of an economic development strategy for the state. State legislators approved it in 2012 and 2013. The legislation would legalize four new casinos in the state, with at least one committed to each of three upstate regions. In a final step in the legislative process, the decision is with state voters, who will approve or reject the measure on a Nov. 5 election ballot.

With a mayoral election in the city and no statewide election this year, past election data indicates that roughly a third of voters will likely live in one of the five boroughs. As a result, the casino referendum, a key initiative for Sullivan County and other struggling upstate regions, may be decided in large part by urban voters in New York City.

According to Bonacic, who is the chairman of the senate Racing, Wagering, and Gaming Committee, past polls found city residents and local leaders have consistently opposed casinos in the city.

But the results were much different when the language for the referendum was changed to say that it would promote job growth, increase aid to schools, and lower property taxes. A Siena College poll found that 56 percent of New York City voters support and 40 oppose the referendum when reading the new language.

The ballot language has been criticized for not presenting the issue to voters objectively. However, according to Siena’s poll, 54 percent of New Yorkers did not object to the tone of the language on the ballot.

The New York Times editorial board has come out strongly against the casino referendum. The Times is advising voters not to approve the proposal, calling gambling “a regressive tax that takes its highest toll on those who can least afford it.” The editorial board also argues that casinos bring crime and lead to the deterioration of nearby communities.

Declaring a swath of land in the Catskills a sovereign Indian Territory would have gotten around the state constitutional prohibition on casinos. But even a deal with the Mohawks that won final federal approval from the Department of the Interior in 2006 ultimately fell through.

If the referendum passes, casinos could be licensed off reservation land. The legislation specifically designates the Catskills and Hudson Valley region to get at least one of the casinos.

The state estimates new gaming would bring $430 million in new revenue each year. Those dollars are already earmarked for school aid, property tax relief, and local government aid. Sullivan County would be allotted $2.1 million from the casino tax revenue collected by the state.

In August, eight of the county’s nine legislators voted to pass a resolution urging all New York voters to approve the referendum. “It is vital that the people of Sullivan County and the entire State of New York vote Yes on Proposal 1 and that … Class III Gaming be approved,” the resolution stated.

“I don’t think it’s a panacea. The end all be all,” said longtime resident and county legislator Gene Benson. “But it would be a kick-start.”

New casino resorts would bring along other opportunities for the region, said Benson. Existing businesses in the area would benefit from the increased customer traffic. Businesses serving the casinos would also grow in parallel.

Longtime resident and Sullivan county legislator Ira Steingart said his family’s printing business used to get 90 percent of its business from area resorts. These days area resorts makeup only 5 percent of the business.

But those living in Sullivan’s farming communities don’t all want casinos for neighbors. Neither does advocacy group Catskill Mountainkeeper’s Executive Director Ramsay Adams.

“The future of the Catskills lies in development that preserves and builds on its special ecological and historic character, not in projects that anticipate converting its unique and cherished environment into the next Atlantic City,” writes Ramsay in an opinion piece published in the Times Union.

Several shuttered area resorts have been eyed for years as ideal sites for destination casinos.

A plan by Empire Resorts to move its existing Monticello Casino & Raceway four miles to the site of the old Concord Resort Hotel and expand to develop a comprehensive resort destination has been in the works for several years. When legislation was introduced in Albany to make non-Indian casinos in the state legal, the developers arranged to include a casino as well.

A project in nearby Ulster County at the old Nevele Hotel is also gearing up to apply for one of the four casino-resort licenses and the plan is to build a resort, casino, and spa.

Historically “There are a lot of ties between New York City and Sullivan County,” said Benson. “I‘d like to renew those ties.”