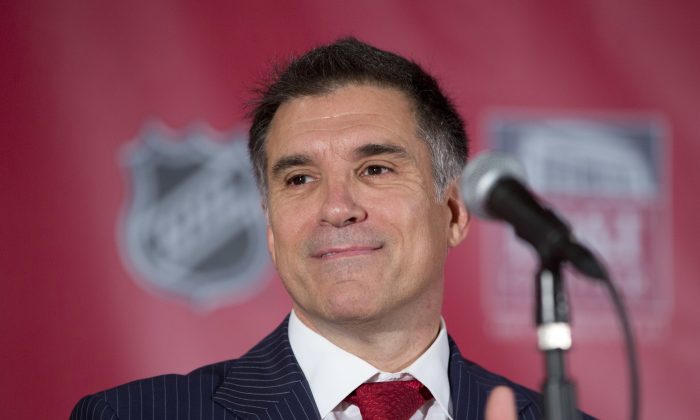 Vincent Viola talks to the media about the future of the Florida Panthers during a press conference in Sunrise, Fla., in this file photo. (AP Photo/J Pat Carter)
Politics

PALM BEACH, Fla.—President-elect Donald Trump on Monday tapped another billionaire businessman for an administration job, naming Army veteran and fellow New Yorker Vincent Viola to be his secretary of the Army.

In a written statement, Trump praised Viola, the son of Italian immigrants, as “living proof of the American dream” and someone who has a lengthy history of engagement with national security issues.

Viola grew up in Brooklyn, the first member of his family to attend college. He was trained as an Airborne Ranger infantry officer and served in the 101st Airborne Division. A lawyer, he started multiple businesses and bought the Florida Panthers hockey team for $250 million in 2013.

Trump announced his choice for Army secretary from Mar-a-Lago, the Palm Beach, Florida, estate where he was spending the holidays with his family and working on the transition. It came as electors in all 50 states were meeting to formally elect him president, paving his way to take office on Jan. 20.

R. Donahue Peebles, board chairman of the Congressional Black Caucus Foundation, also had an appointment with Trump. Peebles is also founder, chairman and CEO of Peebles Corp., a real estate development and investment company.

Meanwhile, Vice President-elect Mike Pence was holding transition meetings in New York, including a foreign policy discussion with Henry Kissinger, who was secretary of state under Presidents Richard Nixon and Gerald Ford.