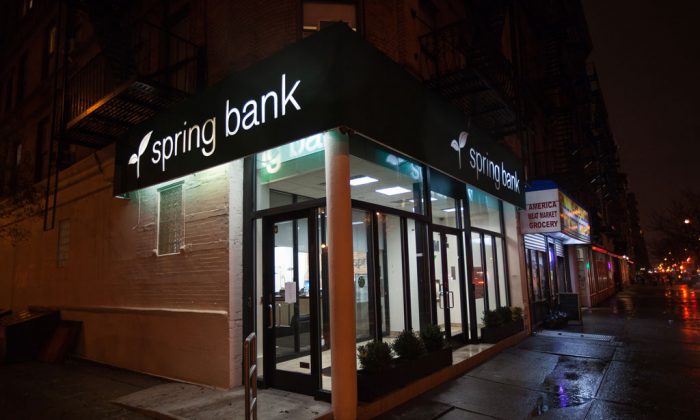 Spring Bank, a pioneer in the creation of borrow and save programs that help credit-strapped borrowers in low-income communities, in Harlem, N.Y., on Nov. 26, 2014. (Petr Svab/Epoch Times)
Business

NEW YORK—New York is considering a novel solution to alleviate the lending needs of credit-strapped low-income consumers called “borrow and save,” a type of loan designed to simultaneously extend credit lines to the needy and help them rejoin the financial mainstream.

The state has traditionally protected borrowers from payday loans by trimming the supply of predatory loans. In 2013 New York’s Department of Financial Services sent cease-and-desist letters to 35 payday lenders, and in August of this year the Manhattan District Attorney indicted a payday lender after a yearlong investigation.

In New York, charging above 16 percent annual interest for a loan is a violation of civil law, and those above 25 percent are a violation of criminal law. It’s one of the fifteen states where payday lending is effectively illegal.

Now, the state is looking into how to curb the demand for short-term loans. On Tuesday, assembly member Annette Robinson, chair of the Committee on Banks, held a public hearing to explore the prospects of a statewide borrow and save program.

Borrow and save is a relatively new financial product engineered to help the credit-needy in low-income communities, the group most vulnerable to predatory lending, by giving them affordable short-term loans and helping them build up their credit at the same time.

Headquartered in the Bronx, Spring Bank offers a borrow and save loan that requires the borrower to keep 25 percent of the loan in a saving’s account that can only be accessed after the last debt payment is made.

The program offers 6 to 12 month loans of $1,500 with no minimum credit score requirement, and loans are underwritten based on the applicant’s ability to pay.

Spring Bank also reports the payments to credit bureaus so that borrowers can help build up their credit and eventually qualify for loans from mainstream financial institutions.

“The goal there was to help people, it does provide a little bit of a cushion, the bank’s not making a whole lot of money on a $1,500 loan,” said Melanie Stern, Spring Bank’s Director of Consumer Lending. “It’s to help people build up enough savings, that they have something to fall back on.”

The program, launched in September, is in part made possible by a $700,000 grant from the Community Development Financial Institutions Fund of the U.S. Treasury.

A Pew report found that in 2010, 12 million Americans used a payday loan, commonly defined as a short-term term loan with an exorbitant interest rate, some exceeding 400 percent annually. New York has some of the most severe restrictions on payday lending in the country, and brick-and-mortar payday lending is outlawed.

The restrictions manage to deter 95 out of every 100 would-be payday loan customers, the Pew report said, but five still turn to illegal websites.

Payday loan customers are usually members of low-income communities with rock-bottom credit scores who are turned away by mainstream financial institutions. Many turn to payday lending services in times of need, but the loan most often exacerbates their economic hardship by design.

Payday loans are often structured to automatically rollover—new loans are made to pay for the previous loan—to extract more interest from customers, who often have to call the payday business a few days in advance to pay the loan in full.

“They say [the loan is] short term but you end up in a long term debt trap,” said Susan Shin of the New Economy Project. “You could end up paying $1,000 on a $250 loan. It can be astronomical numbers, the typical interest may be 400 percent—some are more than 1,000 percent.”

Shin says that in her experience running a hotline for those who have gotten payday loans, victims almost uniformly regret getting those loans. Often, even after they call the hotline and realize that they have no legal obligation to repay those loans, they have little recourse because the lender has direct access to their bank accounts and wires out money automatically.

Payday loan victims often incur frequent overdraft fees from their accounts becoming empty. Closing down their accounts is no escape, as closures are documented at a credit reporting agency, diminishing their chances of opening another account at another bank.

A statewide borrow and save program is still in the brainstorming phase, and the government has yet to approach industry insiders to work out a concrete program.

“I think the state wants to move forward with a program using their influence,” said Ann Solomon of the National Federation of Community Development Credit Unions, who was one of the speakers at the borrow and save public hearing on Wednesday.

“I don’t know if they would try to provide financial support for a coordination effort, what that might look like, we haven’t really had that conversation,” she said, but noted that the state’s “seal of approval” by itself could encourage other institutions to adopt the program.

“There are roughly 6,000 credit unions across the country,” Solomon said, but only one credit union in New York, SEIU 1199, has a borrow and save program.