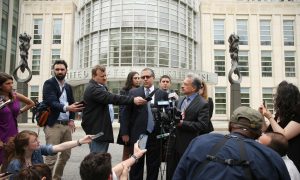 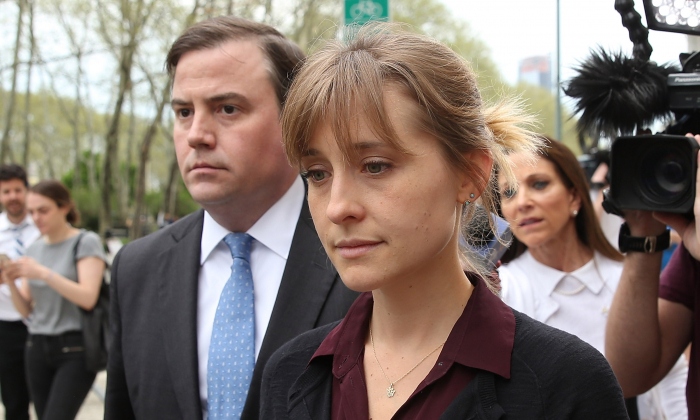 Actress Allison Mack (R) departs the United States Eastern District Court after a bail hearing in relation to the sex trafficking charges filed against her on May 4, 2018 in the Brooklyn borough of New York City. (Jemal Countess/Getty Images)
US News

The evidence collected in the case against NXIVM secret society leader Keith Raniere and his partner, “Smallville” actress Allison Mack, includes claims of human smuggling and alien harboring, according to a May 11 court filing.

Mack and Raniere are already facing charges of sex trafficking and forced labor. The new claims were revealed in a motion to protect sensitive information regarding Raniere’s victims. The evidence includes materials that “identify alleged victims of human smuggling, alien harboring, physical or mental abuse towards an intimate partner, stalking, sexual abuse or sex trafficking,” the court order states.

The prosecutors go on to warn that the evidence in the case includes “highly sensitive material” and personal information that could be so damaging to the victims that it must be redacted before the documents in the case are shared with anyone.

The court papers state that the evidence includes “medical information, discussion of mental and physical conditions, photographs and videos of victims, letters and videos that alleged victims provided as ‘collateral,’ sexual history and sexual conversations.”

The claims of human smuggling and alien harboring were not included in the original indictment filed in New York’s Eastern District. The new language suggests that new charges may be filed in the case. Prosecutors said at a court hearing earlier this month that they may file new charges against Raniere, Mack, and other defendants.

Mack is currently out on $5 million bail. Raniere is being held without bail. Both face 15 years to life in prison if convicted.

NXIVM is a secret society that has operated in upstate New York and elsewhere for over a decade. Members of the society recruited “slaves” to perform labor and sex acts on their behalf, the indictment alleges. The slaves were, in turn, encouraged to recruit slaves of their own.

Secrecy was at the core of NXIVM’s operations. According to the indictment, every member was asked to provide incriminating, damaging, and embarrassing information about themselves in order to join. Once they joined, the members were asked for more and more information as collateral.

Publicly, the society billed itself as a self-help group. Members routinely reached out to high-profile figures to try to recruit them. India Oxenberg, the daughter of “Dynasty” actress Catherine Oxenberg, was among those lured into the scheme.

“He doesn’t have a moral compass,” Catherine Oxenberg told the New York Post about Raniere. “He needs to be held accountable for every single woman and child that he’s ever harmed, abused, exploited, and my daughter is one of those.”

Clare Bronfman, an heiress to the fortune of Seagram’s liquor, is also a member, her father revealed to Forbes in 2003. She financed Raniere with millions of dollars over the years, including paying for his $65,000 private jet flights, according to prosecutors.

Raniere identified all of the NXIVM members as slaves and had many branded with his initials, prosecutors said.