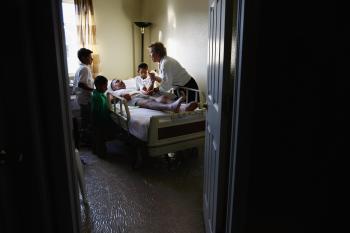 Registered nurse Susan Eager explains to the sons of Carlos Granillo, 31, how to help care for their injured father at their home on November 9, 2009 in Denver, Colorado. (John Moore/Getty Images)
US

Cassie Ryan
View profile
Follow
biggersmaller
Print
Nursing homes are traditionally considered a place where elderly people end up. However, they are becoming the final destination of younger people also in need of care.

About one in seven people cared-for in nursing homes is under the age of 65, according to the Associated Press.

Adam Martin, 26, lives in a nursing home since becoming quadriplegic after a shooting accident and finds his surroundings lonely and depressing. "It makes you feel old," Martin told the AP. "If that's all you're around, that's what you become."

"I'm stuck here," he added. "People die around you all the time."

Some facilities are striking a balance to meet the needs of patients of all ages. Almost a quarter of the 160 residents at Bayshore Health Center in Duluth, Minn., are younger people, who have private rooms in a separate wing, AP reported.

Staff enable a younger lifestyle for patients with outings to nightclubs, a late breakfast option, and meals that include pizza and soft drinks, according to the report.

But with nursing homes mostly geared up to suit elderly people's needs, communities are seeking solutions to meet the caring needs of younger people and prevent them ending up in a home for the elderly.

Katie Chandler, a social worker with the Georgia Advocacy Office, a disability legal group, has a vision for youths like Martin to live life in the community.

Chandler helped instigate the Children's Freedom Initiative and has worked with families of more than 80 youths in Georgia living in state hospitals and nursing homes to find alternative forms of care, according to NPR. Her focus is on meeting their needs and providing better care.

Initiatives such as these are instilling hope back into the lives of young people worried that they might be stuck in a nursing home forever.

Bylon Alexander, now 23, had a stroke at age 6. Her mother and caretaker died last year, and Alexander ended up in a nursing home in Georgia, according to the station.

Alexander has received state approval to move into her own home and hopes to be there by her next birthday. However, she is on a long waiting list for caretakers and for an apartment that is wheelchair-accessible, NPR reported.