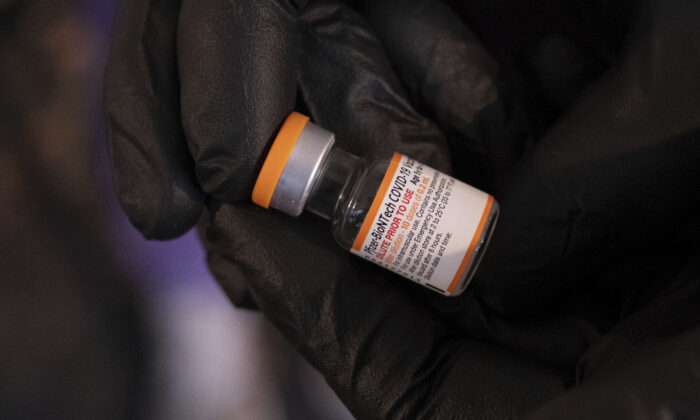 A vial of the Pfizer-BioNTech COVID-19 vaccine for children 5 to 12 years old is shown at a vaccination site in Decatur, Ga., on Nov. 3, 2021. (Ben Gray/AP Photo)
Vaccines & Safety

Nurses in Texas recently administered COVID-19 vaccines to two young children despite the vaccines not being authorized for their age group, leaving their families shocked.

Julian Gonzalez was with his family, including his 6-year-old son, at a trick or treat event at the Mount Hebron Missionary Baptist Church in Garland on Halloween.

Gonzalez decided to get a booster shot at a pop-up vaccination clinic run by the city at the church.

Nurses there asked the ages of the family’s children. When they learned one was 6, they said he could get the Pfizer vaccine.

“Going off of their confidence and what we had read, we were all for it,” Gonzalez told KTVT-TV.

A neighbor’s 7-year-old boy also got the jab.

But on Oct. 31, the shot wasn’t cleared by federal health authorities for use in anybody under 12.

Even after it was this week, health care workers are being directed to give children between 5 and 11 a 10-microgram dose, not the usual 30-microgram injection.

One of the reasons for the lower dosage is because children have seen elevated rates of heart inflammation after getting the vaccine.

The city of Garland called the Gonzalez family on Monday to inform them the boys should not have gotten the jab, and that they got three times the recommended dosage level.

“Where did that decision come from? Who was it that told them they could go ahead and offer it?” Gonzalez wondered.

In a statement to news outlets, the City of Garland Health Department confirmed two shots that shouldn’t have been administered were administered.

The doses were administered “in error,” health officials said, adding that they were communicating with the children’s parents, who were monitoring their children for side effects, and had alerted state health officials.

The city was investigating what happened.

The city couldn’t be reached and the church did not immediately respond to a request for comment.

The Gonzalez boy’s parents said he was suffering some side effects but they had eased. The condition of the other boy wasn’t known.