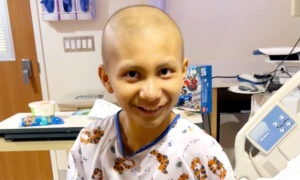 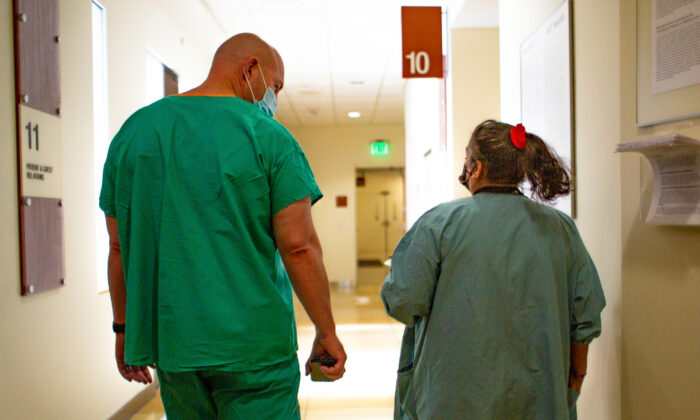 As nurse Anna starts her shift, she doesn’t know whether she’ll be floated from the telemetry unit to the COVID unit, or to the intensive care unit (ICU).

“Sometimes we get put in situations where we’re risking patient safety. And … we’re kind of risking our license if something goes wrong, because we didn’t feel like we were properly trained, but we’re still doing it because we have to, because there’s no choice.”

She and another nurse at a hospital in Orange County, California, told The Epoch Times how they’ve seen patient care suffer and nurses burn out. They spoke of the trials of 2020, especially with hospitals at maximum capacity in recent months. Both chose to remain anonymous (Anna is a pseudonym).

New travel nurses have been hired to help with the surge at Anna’s hospital, but even still, she and her colleagues feel overwhelmed and are often asked to come in on their days off.

“I get emails and phone calls every day that I’m off, to work extra shifts, and sometimes to even work at other hospitals in our network. The hospitals are full and bursting at the seams and don’t have enough staff to care for all these patients,” Anna said.

The hospital she works in currently has over 200 COVID-19 patients, the most it has had since March. It has a little over 400 patients in total, also a record-breaking patient census.

“Our daily COVID census doesn’t even include the patients who were initially admitted for COVID, but have now been in the hospital for two months because they developed other complications secondary to COVID,” she said.

Adam Blackstone, vice president of external affairs at the Hospital Association of Southern California (HASC), told The Epoch Times that in California, “there are more than twice the hospitalizations as the previous peak reached in July, and [it’s] projected to worsen.”

With critical care nurses and other clinical personnel on the frontlines for nearly a year now, the issue of burnout and nursing shortages is becoming more severe, he said.

“Many hospitals in California are now in full-crisis mode.”

On top of the influx of COVID patients, hospitals are also dealing with their normal winter busy season of serious flu cases and other ailments. When these patients—along with those having heart attacks, strokes, and so on—come in, Anna said sometimes “they don’t get the treatment they normally would.”

“The patients that need ICU-level of care … sometimes don’t get an ICU bed but will get a telemetry bed instead,” she said.

At her hospital, the ICU capacity fluctuates between 0–5 percent daily, and nurses are often floated to help on different floors. She said she’s heard the hospital is considering outdoor tent options to accommodate the surge.

“If I’m trying to advocate for a patient to go to ICU and they’re not doing well—they need higher level of care—then the response is, ‘Well, we don’t have beds, you’re just going to have to manage it.’”

Another consequence of being in “full-crisis mode” is the recent changes in hospital safety protocols.

However, this means that nurses are handling more patients than they’ve been trained to care for, Anna said, and sometimes non-ICU-trained nurses are working in the ICU to meet the demand.

“No matter if you are a COVID patient or not, the care you receive might not be up to par with what you need. And not because the people treating you aren’t good at their job, but because they are so overworked, pushed into uncomfortable situations, and stretched beyond their limits,” Anna said.

Another nurse told The Epoch Times the hospital has also hired some new graduates from nursing school, but the responsibility for training them falls on the nurses who are already overworked.

“Trying to take care of four patients and teach the new grad when you’re barely trying to give care for four patients with the new ratio … it’s just a lot of extra work,” she said. “You would think that it would be like, well there’s two [sets of] hands, but the new grads are very scared,” she said.

Nonetheless, more nurses are needed, so it remains a priority to train them.

A sentiment both nurses shared was that it’s been hard not knowing what the future holds. No matter what breakthroughs with treatments have been talked about, things have always seemed to get worse.

“I really had a hard time just never knowing what I was going to walk into at work, feeling like we’re fighting a monster that we knew nothing about,” Anna said. “And seeing patients die or say goodbye to their family on FaceTime like that—that just kills me.”

Anna decided to take the Pfizer vaccine because to her it’s a “glimmer of hope” for a year that’s had so many uncertainties. And although she’s not sure the vaccine is going to turn things around, it gives her hope that there could be a breakthrough on the horizon.

“I didn’t do it just for me. I did it for my family, friends, and my patients I treat,” she said.

Initially, she did have some hesitation. She said she “wasn’t sure that something produced so quickly could have the same efficacy as other vaccines that need years to produce.

“I also had hesitation because the process and science behind this vaccine is completely new, but could be revolutionary to the way we make vaccines. … I still have some worry about the long-term side effects, and if there are any, because there’s no science to speak to that yet.”

She said the vaccine is a touchy subject for many, but she believes each person should be able choose what’s best for his or her health.

“I don’t believe this vaccine should be forced upon anyone, not even health care workers or high-risk groups. I have lots of coworkers that have opted out of getting the vaccine until a later time, and I stand with them in their choice,” she said.

“As an endnote, and hopefully a sense of peace, we as humans are resilient. I am truly grateful for some of the people I work with who always step up when they are called and have worked extra shift after extra shift to serve others,” Anna said.

“Personally, being a nurse during this year of chaos has taught me many things about my faith, perseverance, and the beauty in the fragility of life,” she said.

On Dec. 29, health officials extended the stay-at-home orders for at least another three weeks in Orange County.

“We essentially are projecting that the ICU capacity does not improve in Southern California and San Joaquin Valley, and that demand will continue to exceed capacity,” California Health and Human Services Secretary Dr. Mark Ghaly said.

The announcement means restaurants, gyms, breweries, and wineries will have to remain closed until the ICU capacities are above or equal to 15 percent.