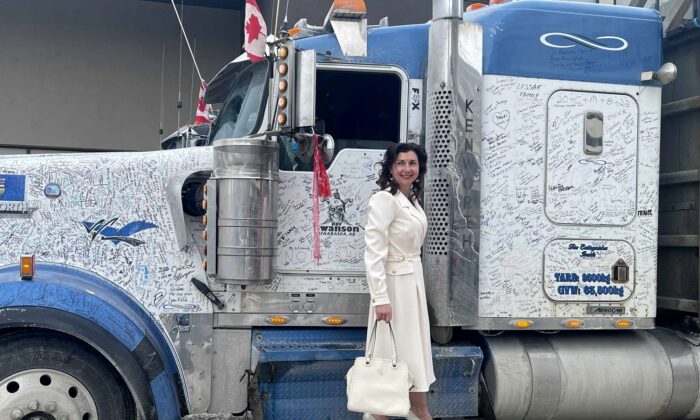 Svetlana Dalla Lana stands on the step of a truck that had returned from the convoy protest in Ottawa, during an Ezra Wellness promotional event in Regina, Saskatchewan, on Feb. 27, 2021. (Courtesy of Svetlana Dalla Lana)
Canada

Refusing the COVID-19 vaccine cost B.C. nurse Svetlana Dalla Lana her job, her marriage, and access to her children, while straining other relationships. But she says she has found a new career in line with her passion, new relationships, and renewed hope.

Two years ago, Dalla Lana worked as a primary care nurse at her husband’s medical clinic in Christina Lake, B.C. However, problems in her personal life snowballed as her convictions on the authorities’ response to the pandemic ran contrary to her husband’s.

“I was married for 20 years. He was a family doctor for 12. Was our marriage great? I would say no. Were we equally yoked? No. Did it [COVID-19 issues] divide us within days? Yes, it did,” Dalla Lana told The Epoch Times.

“He asked for a divorce and I said yes, and then we just shared the house until we sold it. … I was able to break free with my truth. It’s been painful. I’ve lost so much. A divorce in a pandemic I would never recommend,” she said.

Problems escalated as Dalla Lana was terminated from her nursing job by Boundary Health Care Cooperative—COVID-19 vaccination was required and she would not take the vaccine. The province instructed health profession licensing bodies to remove the license to practice for anyone who didn’t have at least one dose by Oct. 26, 2021, a policy Dalla Lana calls “coercive.”

“A college that tells their members have to get vaccinated in order to keep their license is insane,” she said.

“I got fired with no pay and no EI [employment insurance]. … It’s insane because you’ve paid into [EI] for your entire career, and then this happens and you can’t survive financially.”

More than 4,000 health-care workers in B.C. were put on unpaid leave when the Oct. 26 vaccination deadline passed. Dalla Lana says she knows five health-care professionals who lost their job and marriage over their vaccine stance.

“My mom, my dad, my sisters, they’re all vaxxed and they don’t really like to associate with me now because I’m not vaxxed. My friends have changed,” she said.

Eventually, Dalla Lana also lost custody of her children. She had 50/50 custody of her children aged 10 and 12 until Feb. 14 this year. She provided The Epoch Times with their father’s affidavit seeking custody and the ability to vaccinate their children. Most of its content laid out her COVID-19 stance and activism, strains her opposition to masks and the vaccine put on the children, plus allegations that she was less reliable for parenting tradeoffs since the fall.

It was in those months that Dalla Lana ramped up her public activism against vaccine passports and the vaccination requirement for health workers. In October she launched the Ezra Wellness clinic in nearby Grand Forks to give ousted health-care professionals like her a place to use their talents and also to promote an alternative approach to wellness. More clinics have since popped up in B.C. and Alberta.

“We focus on health promotion and disease prevention through a variety of holistic modalities. We empower mind, body, soul and spirit, and energy, and we give the power back to the person’s consent. So health care is of the old, well-care [and] wellness is of the new,” she said.

“If you take care of yourself, your body, eating the right foods, and putting plant-based medicines in your body as opposed to the big pharmaceutical drugs then you’ll be so much healthier. So we have to empower people to do it.”

Dalla Lana saw her life change again in recent weeks when she “happened to be in Calgary” and met Dale Leicht, CEO of First Merchant Capital Inc. He soon hired her as the managing director of performance and wellness.

“I was in his office eating a salad and he pretty much offered me a job. He had a business plan that he created five years ago about increasing the mental and physical well-being of people on planet Earth,” she explained.

“And two days later, Theoren Fleury comes along just by chance and he hires him as the president of his company,” she added, referring to the former NHL hockey player.

Dalla Lana recently moved to Calgary, but on Feb. 27 she, Leicht, and Fleury were in Regina to promote Ezra Wellness, the freedom movement, and alternative therapies. Truckers returning West from the convoy protest in Ottawa joined to participate, which she says was not “coincidence” but “synchronicity.”

The wellness promoter says a recent renewal of her faith has allowed her inner being to match the kind of positive transformation she wants for others.