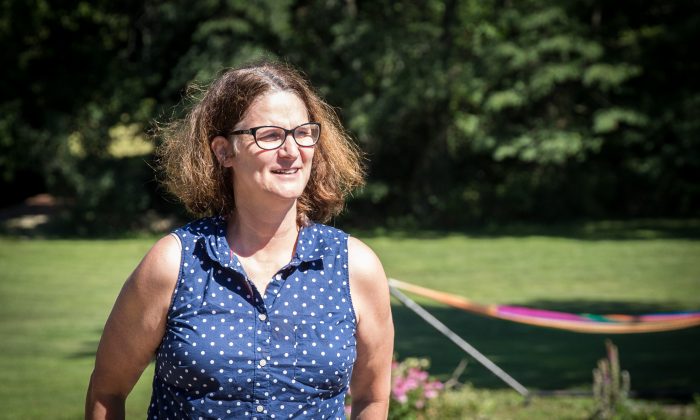 “I value my family, I value my work, I love my job, I love contributing to society … I enjoy traveling, and I want to be safe,” she said.

She has three adult children and two young grandchildren (whom she and her husband of 35 years were looking after when we visited).

Murphy voted for Trump because she was concerned about the direction America was heading.

“I think a big threat is our debt, if you’re talking governmental policies. For example, the debt ratio. In October, right before the election, it was 105 percent debt to GDP ratio,” she said.

“To me—and that’s part of my internal values, and how I run my household, how I feel everyone should run their world—and that is, money runs out.

“We also traveled to Europe last summer and saw some of the downfall of Greece. In Athens, streets and streets and streets just boarded up, there’s nothing there. Driving through the beautiful countryside, there are semi-loads of just garbage along the streets, just for as long as you can see, because there is no money to pick up the garbage. So people go dumping it along the roadside, just to get it out of their homes and whatnot.

“So I do not want to see that happen to my country.”

“The entitlement spending is over a trillion dollars. I don’t want anyone to suffer without food, without a roof over their head, without basic medical care, but what I have seen … is abuse of that system,” Murphy said.

“So we’re making people dependent on others and it kind of gets a little further from the American dream. We want to rely on ourselves, so how can we help people become more self-reliant?” She said we don’t want a situation “where no one can do it without the government’s assistance.”

Murphy says the Affordable Care Act, or Obamacare, is a failed policy. She works in both a private women’s health clinic and a Health Department clinic and sees patients across all the socioeconomic strata.

“So I do understand insurance policies. I also think that everyone should have basic health care. That is a given.”

But, Murphy says, not being able to cross state lines with health insurance, along with other restrictions, on top of the cost, make Obamacare a failure.

“It’s becoming cost-prohibitive. Mine has continued to escalate to the point of [being] almost out of control,” she said. Her daughter paid $1,024 per month with an $8,000 deductible last year, the same year she had her second child.

“I take care of these people every day. They are foregoing health care because they cannot afford it. So this is a failed policy in my mind. This is not enabling the American citizens to get health care.

“I actually have to counsel women to quit their job so that they can afford and be on Medicaid. Otherwise, they have this ACA plan that they can’t afford—even though they’re trying their darndest to work and to feel good about themselves and be a productive member of society, and then they can’t.”

Murphy said Trump had a better approach to border security. “Hillary truly ran on open borders, and again, that is the furthest from my mind.

“I’m not saying not help people, but we can’t save everyone, and we can’t open our borders and let everyone in, because there are safety issues. I mean, we don’t leave our house just totally unlocked.”

“Everyone that said that Trump voters are not educated, they’re racist, they don’t care about anyone else, they’re stupid. … Well, I’m not any of those things, and I just kind of kept my mouth shut and voted for Trump,” Murphy said. “And I think that’s how he won the election.”

“What floors me is, as a Caucasian, middle-aged woman, at every turn on the news, they want to call me racist.

“I’m really tired of that. I’m not racist, I have multiple friends from many nationalities and backgrounds, and I love having them, and it’s so interesting to be with them.”

Murphy is happy with Trump’s progress so far, although she does wish he would slow down on his tweeting.

“I feel like he is trying to keep the promises he has put out there. What he has said he is going to do, he has sure tried to do it,” she said.

“I’m happy with my 401k, I’m thrilled with how that’s doing. He’s been trying to slow down the borders. I hope Donald Trump can continue.

“And he’s not taking a salary, which I find very interesting. So I think, in his heart, why would he do this? Would he do it for power? He had a lot of power, worldwide power. Is he doing it for money? Well, he’s not taking money. … He has side-stepped from his business. So I have to believe that, in his heart, he does want what’s good for our country.”

But, Murphy said, she still has fears for the future of America.