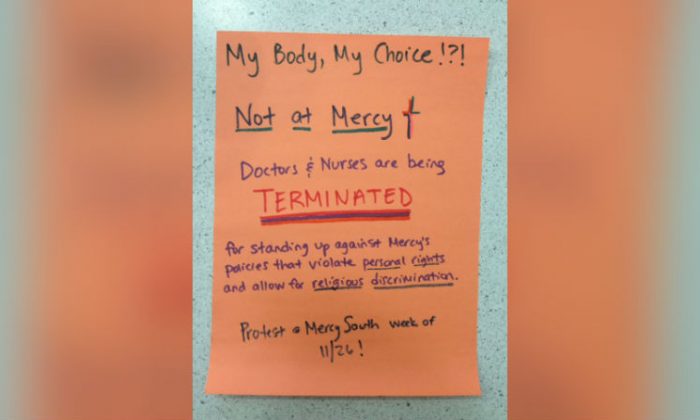 A nurse had her job at Mercy South Hospital in St. Louis, Missouri, terminated after she requested to be exempted from getting a flu vaccine for religious reasons on Nov. 26, 2018. A protest took place outside the hospital on Nov. 27, 2018. (Nalia Aubuchon)
US News

Fury has erupted over a nurse being fired from a hospital after asking not to receive the flu vaccine for religious reasons. Mercy South Hospital in St. Louis, Missouri, confirmed at least one employee has been dismissed for violating a policy requiring staff to have mandatory flu shots, according to the Associated Press.

The unidentified nurse finished work at the hospital on Nov. 26, sparking a protest outside the very next day, protest coordinator and friend of the nurse Nelia Aubuchon told NTD on Nov. 29.

The nurse had worked at the hospital for five years and had already been granted a religious exemption in the past when the hospital was formerly known as St. Anthony’s Medical Center, Aubuchon told Fox 2.

However, this changed after Mercy and St. Anthony’s Medical Center officially became affiliated on June 1, 2017. The facility’s name changed to Mercy Hospital South on Oct. 1, 2018.

According to Aubuchon, the nurse had applied for a religious exemption from having a flu vaccine but the hospital refused. The nurse appealed and her appeal was then denied.

Mercy South Hospital told the nurse she had to have the flu vaccine or face termination, Aubuchon said. Because the nurse did not have the vaccine, her employment was terminated on Nov. 26.

Bethany Pope, a spokesperson for Mercy South Hospital, said in a media statement: “the point of our flu vaccination policy is simple: protection against the flu virus saves lives, especially those of our most vulnerable patients. Requiring health care co-workers to be vaccinated for the flu is a best practice across the U.S. to ensure the safety of patients, co-workers, and community members.”

“Mercy revised our flu vaccination policy several years ago and requires compliance with the policy by all Mercy co-workers as a condition of employment. Those co-workers whose exemption requests were not accepted will be notified this week and, in accordance with our policy, will not be permitted to remain employed without receiving a vaccination.”

Pope said that that the hospital’s policy is the same “as most hospitals across the country.”

“This is an important step in protecting our patients, visitors, and co-workers,” she said.

There are about 44,000 people employed under the Mercy Health system, which spans Arkansas, Kansas, Missouri, and Oklahoma.

This year, the hospital had approved “the majority” out of a total of 170 exemption requests for “meeting valid medical or religious exemption criteria,” Pope told Fox News.

Aubuchon said there are still many unknown factors involved in the nurse’s firing and the resulting protest.

“The entire problem is that Mercy has yet to explain how they determine what is a ‘valid’ religious or medical exemption,” she explained.

“They should provide a more detailed accounting on the locations of the accepted medical and religious exemptions, as well as a more detailed explanation of how they determine what constitutes a ‘valid’ religious or medical exemption.”

Aubuchon said the Mercy Health System has not revealed the exact number of the medical and religious exemption requests that have been accepted in total and at Mercy South Hospital.

People Are Being Killed for Organs in China’s Hospitals