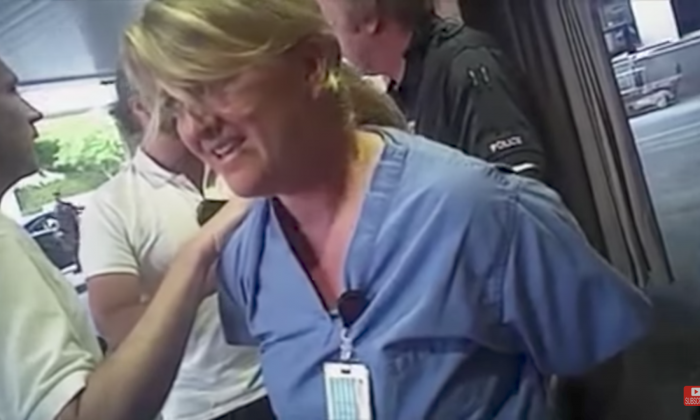 The nurse who refused to draw blood from an unconscious patient and was illegally arrested for doing so was hailed a hero late on Friday, Sept. 1, by the patient’s employer.

Nurse Alexandra Wubbels refused to draw blood from an unconscious patient in the burn ward at University of Utah Hospital in Salt Lake City on July 26. The detective who demanded she do so, Jeff Payne, proceeded to drag her out of the hospital, forcefully handcuffed her, and placed her into a police car.

Wubbels was released 20 minutes later without any charges.

The unconscious patient who Wubbels stood up for was identified as William Gray, a truck driver and a reserve police officer for Rigby Police.

The Rigby Police Department hailed Wubbels as a hero for standing up for Gray when he was unconscious. Rigby Police did not find out about the July 26 incident until Aug. 31, the day when Wubbels and her attorney released to the public the video footage of what had happened.

“Protecting the rights of others is truly a heroic act,” the Rigby Police Department wrote in a press release.

“The Rigby Police Department would like to thank the nurse involved and hospital staff for standing firm, and protecting Officer Gray’s rights as a patient and victim,” the department added.

Gray was injured in a head-on collision in northern Utah when a car fleeing police slammed into his truck. The driver of the car died in the accident. Gray survived with severe injuries.

“It is important to remember that Officer Gray is the victim in this horrible event, and that at no time was he under any suspicion of wrongdoing,” the Rigby Police Department said in the statement.

The police officer who made the illegal arrest was put on paid leave while a criminal investigation into the incident proceeds. The Salt Lake City Police Department also issued an apology to Wubbels.

“As the videos and news accounts make clear, there is no excuse for this assault, or her arrest, which sends a chilling message about the safety of nurses and the rights of patients,” Jean Ross, co-president of National Nurses United, said in a statement.