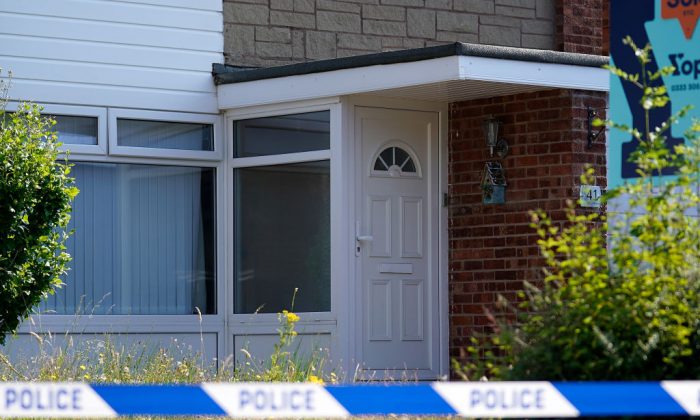 A police officer stands outside a house in Chester after a healthcare professional working was arrested on suspicion of murdering eight babies and attempting to kill six others, on July 4, 2018 in Chester, United Kingdom. She was released on bail on July 6. (Christopher Furlong/Getty Images)
UK

A nurse who was arrested on suspicion of murdering eight babies and attempting to murder another six has been released on bail pending further inquiries, police said.

She has not been officially named by police, but British media reports have identified the nurse as 28-year-old Lucy Letby.

She was arrested on July 3 in a probe into the deaths of 17 babies at the Countess of Chester Hospital neonatal unit.

Cheshire police said in a statement on July 6, “This is an extremely difficult time for all the families and it is important to remember that, at the heart of this, there are a number of bereaved families seeking answers as to what happened to their children.”

The arrest was part of an ongoing investigation into the higher than expected level of infant deaths at the hospital, launched in May 2017.

Initially focusing on the deaths of 15 babies between June 2015 and June 2016,  the investigation has now widened to a total of 17 baby deaths and 15 non-fatal collapses.

In an interview with The Chester Standard in 2013 about her job, Letby said she qualified as a children’s nurse from the University of Chester in 2011 and cared for babies requiring various levels of support at the neonatal unit.

Liverpool Woman’s Hospital confirmed on July 4 that she had placements there during her training.

“We are cooperating with police as part of their investigation, which includes a routine review of patients cared for on our Neonatal Unit during the time of these placements. There is currently no suggestion that any patients at Liverpool Women’s came to any harm in relation to this investigation.”

Detective Inspector Paul Hughes of Cheshire Police said in a statement, “This is a highly complex and very sensitive investigation and, as you can appreciate, we need to ensure we do everything we possibly can to try to establish in detail what has led to these baby deaths and collapses.”