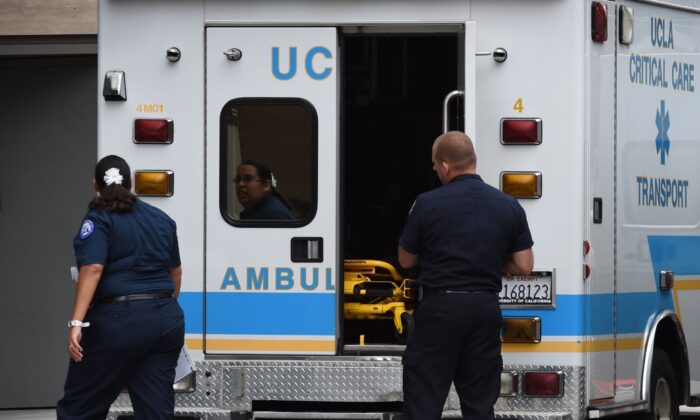 LOS ANGELES—A registered nurse suspected of speeding a Mercedes-Benz through a Windsor Hills intersection, sparking a fiery crash that killed six people—including an infant, a pregnant woman, and her fetus—remained hospitalized and under arrest Aug. 5 on suspicion of vehicular manslaughter.

The Mercedes driver, Nicole Lorraine Linton, 37, of Los Angeles, survived the Aug. 4 afternoon crash and was hospitalized with “moderate” injuries at Ronald Reagan UCLA Medical Center, according to the California Highway Patrol.

She was arrested on suspicion of vehicular manslaughter with gross negligence, according to the authority. There was no immediate word if drugs or alcohol factored into the crash.

“While driving the Mercedes, Linton proceeded through a red light and collided into multiple vehicles traveling eastbound and westbound on Slauson Avenue. As a result of this collision, multiple parties were ejected and two vehicles were fully engulfed in flames. Following the collision, involved parties were transported to [Ronald Reagan UCLA Medical Center] by ambulance and six individuals were declared deceased on scene,” the highway patrol reported.

The make and model of the involved vehicles are unknown due to the extensive fire damage, the highway patrol reported.

Kaiser Permanente issued a statement Friday saying, “Everyone at Kaiser Permanente is deeply saddened by Thursday’s horrific crash. It’s impossible to imagine the pain those involved are experiencing. Our thoughts are with everyone affected by this tragedy. At this time, we are not able to comment on what has been reported as a criminal investigation.”

The pregnant woman who died in the crash was identified Friday by the coroner’s office as 23-year-old Asherey Ryan of Los Angeles. She and her male fetus were among the victims killed in the crash Thursday.

According to Ryan’s family, the woman’s year-old son, Alonzo Quintero, was also killed, along with Ryan’s boyfriend, who was the father of her unborn son. Ryan’s boyfriend was driving the car when the crash happened.

Ryan’s sister, Sha’seana Kerr, posted a video online, in the video, Kerr said Ryan was 8 1/2 months pregnant, and she was on her way to a doctor’s appointment when the crash occurred.

“She left the house at 1:30. She woke me up,” Kerr said. “She woke me up and told me she was going to go to her doctor’s appointment, that she loved me and she’ll be right back.”

She said that 15 minutes later, she saw the video of the car crash.

“And for some reason, as soon as I saw that video, it hit me. It felt different. I felt connected,” she said.

Kerr said she cried throughout the night.

A GoFundMe page established on behalf of the family had already raised nearly $16,000 as of Friday afternoon.

Dramatic surveillance video from the scene showed the Mercedes plowing through the 35 mph zone on La Brea at a speed authorities estimate neared 100 mph—speeding through a red light at Slauson and broad-siding a vehicle.

The crash ignited an inferno as the sedan struck by the Mercedes was pushed into at least one other vehicle, and both wound up against a gas station sign on the corner. A trail of fire was left burning in the intersection as the vehicles struck by the speeding driver were engulfed in flames.

The California Highway Patrol reports indicate eight vehicles, including Linton’s, were involved in the collision. The heavily damaged Mercedes ended up near a bench down the street.

According to the fire department and the highway patrol, three adults and one infant died in the collision, and there were multiple ejections due to the crash. Ryan’s male fetus was also being counted among the deceased.

The highway patrol reported a sixth victim was later found dead in the burned wreckage of one vehicle, but further information about that person was not immediately available.

Eight others were injured in the collision, including seven occupants of a Chevrolet Traverse. The 33-year-old driver, a year-old boy, and three teenagers suffered moderate injuries, while two other teens inside the vehicle had only minor injuries.

The eighth victim—the 19-year-old driver of an Audi A3—also suffered minor injuries in the collision.

Community activists gathered at the intersection Friday, adding to a growing memorial of candles and flowers for the victims of the crash.

“This is a catastrophic situation that has taken place in our community,” activist Eddie Jones told reporters. “I cried all night, because someone innocent who did not deserve to lose their life, lost their life.”

Earl Ofari Hutchinson, a nearby resident and president of the Los Angeles Urban Policy Roundtable, told reporters the intersection has been historically dangerous with speeding vehicles, as well as the scene of occasional street takeovers.

Veronica Esquivel, 40, told the Daily News she was about to pump gas at one of the intersection’s four stations when the crash occurred.

“I heard the collision. I saw the fire … you see the fire at a gas station I just immediately thought explosion,” Esquivel said. “I saw things flying in the air … I didn’t know if something was going to come through and hit me.”

The intersection of La Brea and Slauson avenues reopened around 3:30 a.m. Friday.