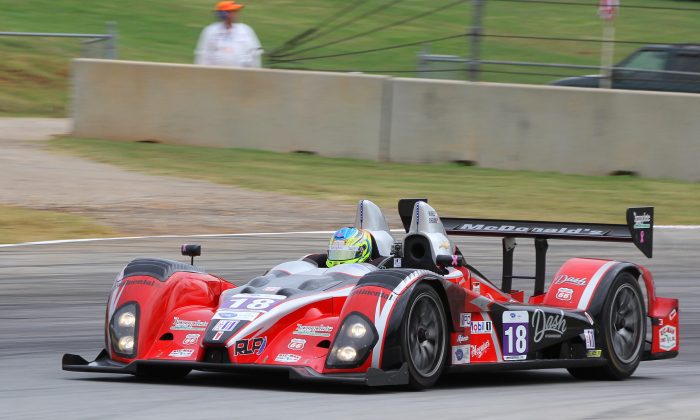 That title led to the Florida teen his big league debut, driving a PC-class Oreca prototype in the American Le Mans Series, the premier sports car series on the continent. This weekend he will finish the season by competing in Petit Le Mans, the ten-hour American endurance-racing classic.

PC is a hotly contested class where both rising stars and established veterans compete, but nothing cowed Nunez, who opened the season with a podium at the prestigious Sebring 12 Hours. He followed up with podiums at Monterey and Lime Rock, and a win at Baltimore.

Naturally he’d like to end the season on a high note.

“It would be great to end with a win or at least a podium,” Nunez said in a press statement. “Our main goal this weekend is to be able to get enough points to finish in the top three in both driver and team championship points and we are very close!

“We were third going into VIR but now we are just a handful of points away. This race will decide it all.

“I’m obviously really excited to go back to Petit; I have a lot of history there. It’s the first place I ever had a weekend sweep, running at the top across the board. I prefer endurance races and I think it’s one of my strong suits so it’ll be a fun weekend.”

Nunez will be splitting driving duties with Charlie Searing as he has for several races this season. While any teams opt for a third driver, Performance Tech chose to split seat time between jus the two.

“I think it will be a nice cap to the year having just Charlie and I run the race, kind of a testament to our year together as teammates,” Nunez said.

Nunez currently lies fifth in driver points, only six behind third-placed Jon Benet and seven points out of second. A win for the Nunez and Shears coupled with a retirement for points leader Mike Guasch could propel Nunez to the top.

Performance Tech lies fourth in team points, 18 out of the lead. It would be unlikely that the team could close the gap even with a win, but a lot can happen in ten hours.

Nunez is also in the hunt for ALMS rookie of the year. Competition is stiff; there are a lot of young, talented drivers on the grid. A win at Petit would be a huge boost to his chances.

Whatever happens at Petit, Nunez has already had a winning season—in Grand Am’s Rolex Series, the other half of what will be the United SportsCar Championship in 2014. He showed his versatility by winning four races in the GX class Visit Florida/SpeedSource Mazda6 SkyActiv diesel sedan. Nunez finished fourth in driver points despite missing a round, and the team was second in the team rankings.

As one of racing’s most successful rising stars, Nunez has options galore for 2014. While neither Mazda or Performance Tech have announced firm plans for the 2014 USCC season, either team—or any other—would do well to pick up the young star.

Nunez has proven he can win in GTs, prototypes … even open wheel, as he demonstrated when he beat the world’s best at the 2012 Formula Ford Festival, where he won the coveted Walter Hayes Trophy. He has a wealth of options—but right now the only thing on his mind is climbing to the top of the podium Saturday night.