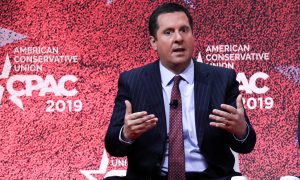 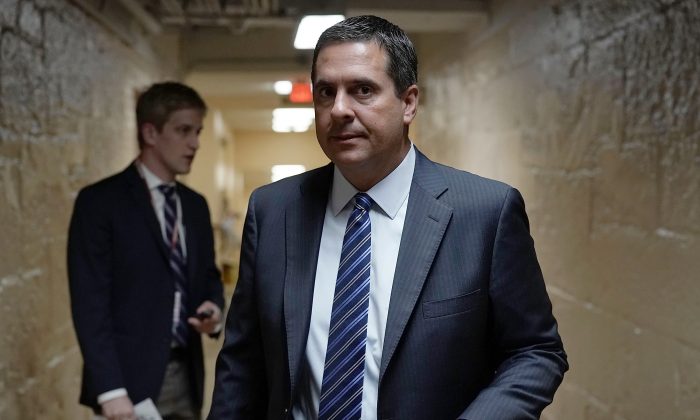 Rep. Devin Nunes (R-Calif.) filed a lawsuit alleging that opposition research outfit Fusion GPS and left-leaning watchdog group Campaign for Accountability (CfA) engaged in a racketeering conspiracy by filing ethics complaints against him that the suit called “fraudulent and retaliatory.”

The federal suit, filed on Sept. 4 in the Eastern District of Virginia, alleges that Fusion GPS and CfA targeted Nunes in order to “intimidate, harass, threaten, influence, interfere with, impede, and ultimately to derail” his congressional investigation, which puts Fusion GPS and its co-founder, Glenn Simpson, at risk of prosecution.

Fusion GPS is best known for commissioning in 2016 the so-called Steele dossier, a collection of unverified and unsubstantiated claims about then-candidate Donald Trump centered around alleged collusion with Russia to skew the presidential election. Fusion GPS was paid $1 million for the job by the Democratic National Committee and the campaign of Trump’s opponent, former Secretary of State Hillary Clinton.

The FBI, and later, special counsel Robert Mueller, chased the collusion allegation for nearly three years, yet failed to establish its veracity.

In an emailed statement to The Epoch Times, CfA called Nunes’s suit “ridiculous” and accused him of “trying to muddy the waters by attacking an independent watchdog group.”

Nunes’s suit seeks nearly $10 million in damages, as well as “dissolution and/or reorganization of Fusion GPS and CfA.”

The suit asserts a parallel between how Fusion GPS spread the Steele dossier to media and how the CfA ethics complaints were “leaked” to McClatchy media. Nunes filed a lawsuit against McClatchy in April, claiming $150 million in damages for defamation.

Fusion GPS didn’t respond to a request by The Epoch Times for comment.

In his former role as the chairman of the House Intelligence Committee, Nunes was investigating the Russian election-meddling, focusing, in part, on the origin of the Steele dossier.

He subpoenaed testimony and documents from Simpson and two other Fusion GPS partners, as well as financial records of the firm from TD Bank.

“Simpson knew that there was a substantial likelihood that he could be indicted for making false statements to the FBI and DOJ, lying to Congress and the Senate, and for obstructing justice,” the suit states.

Starting on Jan. 25, 2018, about a week after the release of Simpson’s House testimony, CfA filed three requests for investigation with the Office of Congressional Ethics (OCE) on whether Nunes leaked to media information about Fusion GPS and text messages pertaining to Steele, as well as whether he failed to include some information in his financial disclosures and whether he accepted “an impermissible gift.”

The OCE reviews information it receives to first determine whether there is a “reasonable basis” to start an investigation. If an investigation is opened by the OCE, it has 89 days to determine whether there’s a “substantial reasonable belief” that an ethics violation occurred. It then sends a report to the House Committee on Ethics, either recommending a further review or dismissal of the matter.

If the committee opens a review, it has to publicly acknowledge so within 45 days and then has another 45 days to finish the review and release its findings.

The ethics committee hasn’t released any statement regarding Nunes, either this year or last year, indicating that either the OCE decided not to open investigations based on CfA’s requests or recommended that the matters be dismissed.