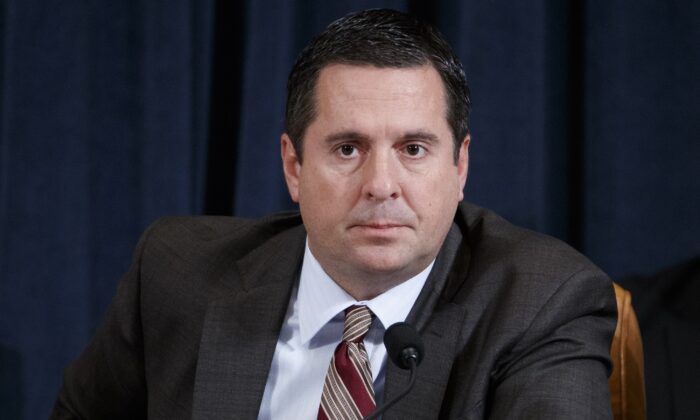 According to a complaint obtained by The Epoch Times that was filed Tuesday in the U.S. District Court in the Eastern District of Texas, Nunes’ attorneys allege that Maddow and the network “made, published, and republished numerous false factual statements” regarding Nunes that accuse and impute to him multiple crimes, including obstruction of justice and treason.

Nunes’ attorneys pointed to statements Maddow made during her March 18 show suggesting the California Republican refused to turn over to the FBI a package that he reportedly received from a suspected Russian agent.

The complaint singles out three statements made by Maddow that purportedly suggest Nunes was guilty of criminal conduct.

“Andriy Derkach is sanctioned by the U.S. government as a Russian agent. He is singled out by name by the Director of National Intelligence as someone under Vladimir Putin’s direct purview who helped run this organization targeting our election last year. Congressman Nunes accepted a package from him. What was in it?” the first statement reads, according to the complaint.

“Congressman Nunes has refused to answer questions about what he received from Andriy Derkach. He has refused to show the contents of the package to other members of the intelligence community. He has refused to hand it over to the FBI which is what you should do if you get something from somebody who is sanctioned by the U.S. as a Russian agent,” Maddow’s second statement reads.

The attorneys allege that the statements are “materially false” and expose Nunes to “public ridicule, scorn, contempt, censure, and prejudice” in his role as a Congressional representative.

The complaint says that Nunes did not accept a package from Derkach, nor did he have any “unexplained interactions” with the alleged agent. According to the Treasury Department, Derkach has been a Russian agent for over a decade.

The lawsuit says the package, which was addressed to Nunes, was in December 2019 sent to the FBI by a designated staff member in Nunes’ office, “following protocol and without the package ever being opened.”

It also says that in January 2020, Nunes and top Republicans on the House Intelligence Committee briefed the FBI on their concerns about the package.

Further, Nunes’ attorneys say he neither refused to show the package to members of the intelligence community nor did he violate any rules or procedures with regard to the package.

The suit alleges that Maddow knew, prior to her March 18 program, that the package had been delivered to the FBI, while claiming that she and the network “harbor an institutional hostility, hatred, extreme bias, spite and ill-will” toward Nunes.

Rather than being based on fact, the attorneys allege that Maddow’s comments about Nunes were motivated by his “emergence as the most prominent skeptic in Congress of Maddow’s marquee news narrative from 2017 to 2019: that the Trump campaign colluded with Russians to hack the 2016 presidential elections.”

NBC representatives did not immediately respond to a request for comment from The Epoch Times.